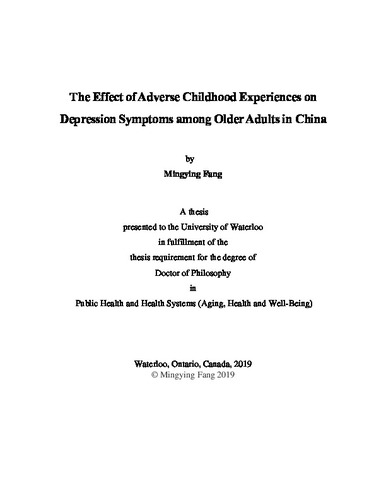 Background Depression is not a normal part of aging. However, it is a serious, growing problem for the elderly population of China, where the world’s largest cohort of people aged 60 and over is growing rapidly. Research recognizes that adverse childhood experiences (ACEs), such as being abused or neglected, are important risk factors for depression and other psychological disorders in later life. Relationships between ACEs and risk factors contributing to depression symptoms in older populations, such as socioeconomic situation, health status, and environmental characteristics have also been established in the literature. In the 20th century, China experienced an eight-year war of resistance against Japan, a three-year civil war, political and cultural revolutions, rapid economic development, and rural-urban transitions. These events may have had a long-term impact on the psychological and physical health of the Chinese population, especially for children who were exposed to these events. However, little research has examined the association between ACEs and depression symptoms in today’s older Chinese population, who were children at the time of these transformative events in China’s history. Objectives This dissertation examined the association between several ACEs and depression symptoms among older adults in China, after controlling for covariates at individual and community levels. Examples of these ACEs include death of parents, death of siblings, physical abuse, being bullied, feeling alone, poor relationships with parents/friends/neighbours, and disadvantaged neighbourhood. Methods This dissertation was based on secondary data analysis of the China Health and Retirement Longitudinal Study (CHARLS) wave 1, wave 2, and life history surveys. A score of 10 on the 10-item Center for Epidemiologic Studies Depression Scale (CES-D-10) was used as the cutoff for identifying the presence of meaningful depression symptoms. The associations between ACEs and depression symptoms were assessed using two-level, random-intercept simple and multiple logistic regression models, adjusting for individual- and community-level covariates. More specifically, the covariates were selected using theoretical justifications from the literature and the least absolute shrinkage and selection operator (LASSO) approach. The theoretical framework of this dissertation was based on the social determinants of health framework, life-course approach, and the social-ecological framework. Results This thesis analysis included 1,218 older adults living in 360 communities after listwise deletion of missing values. The mean age of the respondents was 68.2 years, the majority of whom had low education levels, were female, married, living with their spouses, and living in rural areas. 33.4% reported CES-D-10 scores of 10 or higher, with a median of 7 and interquartile range (IQR) of 7 (maximum possible score = 30). Among ACEs, high rates of parental deaths, physical abuse, hunger, and rural residence before the age of 18 were reported among Chinese older adults. Overall, most of the respondents reported good or better childhood health and no health limitations before age 18. The findings suggest some ACEs are associated with a higher prevalence of depression symptoms in older adults in China. The adjusted odds of depression symptoms were higher for older adults who experienced the following ACEs: bullying (OR= 1.45, 95% CI= [1.01, 2.10]), loneliness (OR= 1.58, 95% CI= [1.08, 2.30]), had a poor relationship with their mother (OR= 1.98, 95% CI= [1.09, 3.58]), and had poor health status (OR= 1.54, 95% CI= [1.07, 2.65]). Conclusion Results from this dissertation show that some childhood adversities can impact depression symptoms in older adults.