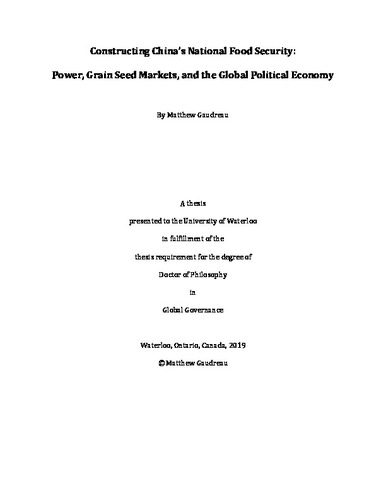 What is China’s place in the global food system? This thesis provides an analytical lens to explain the factors behind the structure of China’s national seed industry and recent global agribusiness expansion. Scholars of Global Political Economy and critical food studies have begun to assess the (re)emergence of actors from China in global markets replete with powerful agribusiness from the global North. However, these scholars have thus far paid less attention to the domestic, normative origins and dynamics that explain China’s place in the global food system. For example, though the global grain seed industry is highly concentrated, China’s domestic grain seed market does not share the same characteristics. To explain this discrepancy and shed light on the place of China in the global food system, I develop the concept of securitized foodways. Securitized foodways is built on a power framework that incorporates both positive and negative forms of power. Three dimensions of power (ideational, material, and autonomy) correspond to three factors that have shaped China’s grain seed industry, its place in the global food system, and its broader economy. The first factor is the Party-state’s ideational priority of self-reliance, particularly in the context of grain security. In contrast to other large Southern countries (e.g., India and the Philippines), the historical priority for China to be self-reliant has led to a distinct conception of national food security focused on national ownership over each segment of the grain supply chain and particularly seed resources. The second factor is the Party-state’s control over its domestic agrifood system through law and regulation limiting the participation of foreign seed companies. More recently, the Party-state’s power over its domestic grain seed markets has shifted into nascent material power in the global food system. This expansion of Chinese agribusiness in the name of national food security occurs through a combination of overseas seed extension projects as well as through the acquisition of foreign agribusinesses including Syngenta, Noble, and Nidera. The third factor is China’s historical autonomy from the U.S. food regime (1950s to 1970s). China remained independent of the agrifood networks developed under the U.S.-led green revolution and food aid architecture, instead establishing its own domestic research networks and extension system. This autonomy provided the Party-state with the power necessary to retain domestic policy space, develop a home-grown seed industry, and challenge the dominance of Northern agribusiness firms in the global food system. Combined, the three factors explain China’s domestic grain seed market structure (ideational priority of self-reliant national food security, material power over the domestic food system, and historical autonomy from the U.S. food regime). Further, these factors serve to explain and interpret the recently expanded presence of actors from the PRC in global grain and grain seed markets. Despite pressure from MNCs and other states, national agribusinesses continue to hold market share in China’s domestic grain seed market demonstrating both the continued normative commitment of Party-state actors to support national industry and the material power to maintain control over national markets in the context of economic globalization. These national Chinese agribusinesses (with the help of financial actors) have also rapidly increased their presence abroad to compete in both domestic and global markets. However, despite the exercise of material power in the global food system, actors from China have not yet displaced the incumbent agribusiness power of MNCs headquartered in the global North. Further, there are challenges and impacts related to the pursuit of national food security through domestically owned industrial agriculture. Given MNC ownership of patents, the potential introduction of genetically modified (GM) grain seeds to the domestic Chinese market presents a challenge to the Party-state’s continued control over the PRC’s seed industry. Further, the growing commercial seed system and discourse of national food security has placed pressure on, but also provided limited space for, alternative food movements within China. These food movements share similar ideational concerns to the Party-state vis-à-vis global agribusiness concentration, but promote a path to food security rooted in local food systems. As agribusinesses from China, with strong connections to the Party-state, expand their global grain and seed networks, both GM seeds and food alternatives are domestic sources of contention for the Party-state’s emerging agrifood power.