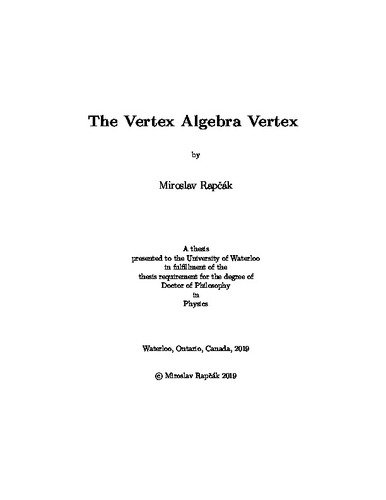 This thesis reviews some aspects of a large class of vertex operator algebras labelled by $(p,q)$ webs colored by non-negative integers associated to faces of the web diagrams [1,2,3,4]. Such vertex operator algebras conjecturally correspond to two mutually dual setups in gauge theory. First, they appear as a subsector of local operators living on two-dimensional junctions of half-BPS interfaces in four-dimensional $\mathcal{N}=4$ super Yang-Mills theory. Secondly, they are AGT dual to $\mathcal{N}=2$ gauge theories supported on four-cycles inside toric Calabi-Yau three-folds. We review four (conjecturally equivalent) definitions of the vertex algebra vertex $Y_{N_1,N_2,N_3}$ associated to the simplest trivalent $(p,q)$ web. The algebra can be defined in terms of 1. the quantum Hamiltonian (BRST) reduction, 2. truncations of the $\mathcal{W}_{1+\infty}$ algebra, 3. the kernel of screening charges and 4. the generalized Miura transformation. Equivalence of such definitions is strongly supported by matching various properties of the algebra such as characters and highest weights of their modules, central charges, duality properties and many others. The algebra $Y_{N_1,N_2,N_3}$ plays the role of a building block of more complicated algebras that can be characterized as extensions of $Y_{N_1,N_2,N_3}$'s associated to each vertex of the $(p,q)$ web by bimodules associated to each internal line. This procedure mimics the topological-vertex-like counting of D0-D2-D4 bound states in toric three-folds that motivates the name ``The Vertex Algebra Vertex''. Conjecturally, there exists an unique (or at least canonical) vertex operator algebra characterized by such an extension. We review different definitions of a larger class of algebras corresponding to truncations of a $\mathfrak{gl}(N_1|N_2)$ analogue of the $\mathcal{W}_{1+\infty}$ algebra and their shifted versions. Finally, we discuss various generalizations of the Feigin-Frenkel duality coming from the S-duality of the $\mathcal{N}=4$ super Yang-Mills setup, stable equivalence (equivalence of vertex algebras up to decoupled free fields) and its interpretation in terms of brane transitions, ortho-symplectic version of the algebras and the structure of their modules. Even though this thesis is largely a compilation of the above-mentioned papers, it contains many novel remarks that are not contained in the original work.