Children use ownership to understand actions and preferences 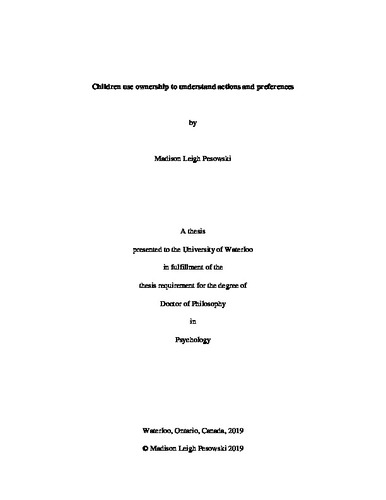 Actions are often dictated by an individual’s desires. While this may be appropriate in many situations, there are important exceptions, such as when an individual desires someone else’s property. Across three papers, this dissertation shows that children consider ownership when deciding how they and others will act, and when inferring people’s preferences for objects. Chapter 2 examined whether young children understand and respect the ownership rights of others when allocating resources to themselves and another agent. When selecting resources for themselves, 2-and 3-year-olds generally took their own resources and avoided those that belonged to the other agent. As such, children use ownership to guide their own actions, and uphold ownership despite a preference to self-maximize. Chapter 3 investigated how children predict people will act when someone else’s property is preferred, and whether ownership influences which objects children believe people prefer. Four-year-olds, but not 3-year-olds, predicted that people would respect ownership, and 5-year-olds predicted people would respect ownership despite preferring someone else’s property. Ownership also influenced children’s inferences about which objects people prefer, as ownership reduced the likelihood that children expect people to prefer objectively attractive objects; however, children were no more influenced by information that the agent owns the object than by information that someone connected with the agent owns it. Chapter 4 examined how children use ownership and object history to infer which objects people prefer. Children age 4-7 were sensitive to object histories that were distinctive and connected the owner to the object—children believed that objects from interesting locations and were acquired in interesting ways were special to owners, but did not believe that original acquisitions were special. Further, distinctive object histories influenced children’s judgments of which common objects (e.g., keychains) are special to an owner but did not influence their judgments of which stuffed animals are special, suggesting that children’s use of distinctive object histories to determine which objects are special depends on the type of object. Together this dissertation reveals that children understand that ownership limits their own and others’ ability to act on their preferences, and consider ownership when inferring which objects are preferred.