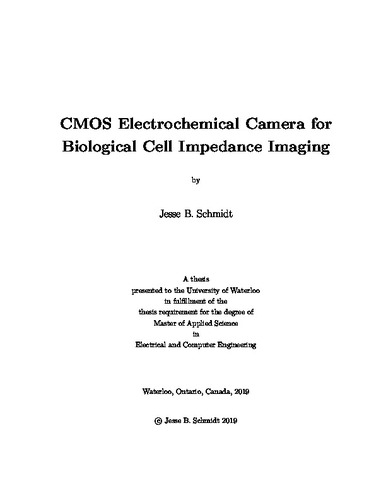 Many biomedical applications require observing the response of biological cells to various stimuli and conditions. Typical optical imaging systems for observing cells require labelling cells with fluorescent molecules. These systems have drawbacks such as limited luminescence time and light-induced damage. However, use of electrochemical based measurement methods overcome these issues. One method, which is label-free and non-invasive, is impedance spectroscopy (IS), which tracks impedance changes caused by variations in cell membrane properties. This thesis describes the design and experimental characterization of a CMOS electrochemical camera for biological cell impedance imaging. The electrochemical camera is fabricated in a 0.18-um CMOS technology, and is the first to implement a row-parallel architecture which improves upon spatial-readout efficiency compared to previously published work. Two integrated microelectrode arrays, one containing 17x11 40x40 um^2 electrodes and the other containing 70x40 10x10 um^2 electrodes, are implemented. Each array is connected to 84 integrated row-parallel lock-in amplifiers to measure the impedance of live cells on the electrode array surface. A novel lock-in amplifier design allows for an electrode pitch of only 20 um. The design of a custom bench-top measurement system for characterizing the performance of the CMOS electrochemical camera is also described. Experimental electronic characterization of the electrochemical camera shows that it can operate from 1 kHz to 1 MHz at a frame rate of 0.0117 Hz, which is sufficient for several cell imaging applications. The measured input-referred noise is 1.08 nArms with an applied input signal at 600 kHz. Compared to previously reported CMOS electrochemical sensor arrays, the presented work consumes the smallest channel area for the sensor readout electronics with integrated analog-to-digital converter, the lowest power consumption per channel for operating frequencies greater than 100 kHz, and the best area-readout figure of merit.