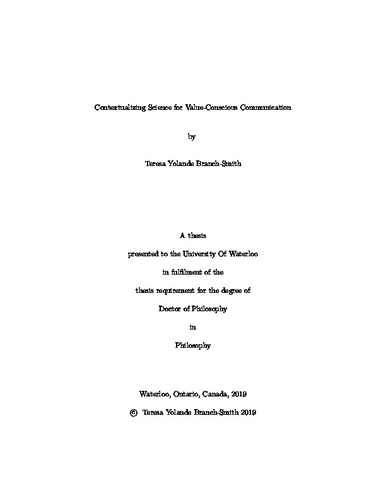 Democracy hinges on the personal and civic decision-making capabilities of publics. In our increasingly technoscientific world, being well-informed requires an understanding of science. Despite acknowledging public understanding of science as an important part of being well-informed, publics’ engagement with science remains limited. I argue that part of publics’ disengagement with science is because information transmitted about science, like science itself, has been decontextualized. Though there are many ways to decontextualize information, obscuring values in science is a popular means of doing so. Due to the ubiquitous nature of values, science misrepresented as ‘value-free’ will be the focus of my decontextualization critique. Epistemic values (intrinsically important for connecting scientific observations to reality) and non-epistemic values (linked to ethical, social, political and personal concerns) are the sorts of values that have been misrepresented by views like the value-free ideal (VFI). The VFI is the idea that non-epistemic values should not play a role in the evaluation of evidence and has been heavily criticized on practical and normative grounds. This has led to alternatives to the VFI being proposed, including ways for non-epistemic values to be included in the evaluation of evidence. In a yet to be explored implication of the VFI, I argue that models of science education and communication that accommodate the VFI have been popularized as a way to reinforce decontextualization. These models describe science and publics with only a minimal account of values, leading me to challenge them on practical and normative grounds since communicating science as ‘value-free’ is misrepresentative, and from a normative perspective undesirable, especially as including values can help engage publics. In response, I advocate for value-conscious descriptions of science instead. To catalyze this contextualization, I introduce key aspects for understanding values in science (based on alternatives to the VFI) and call them the ‘KAUVIS’. By using a basis of transparency between scientists and publics, the KAUVIS provides a means to describe how values interact with science without dictating which values are the correct ones. The KAUVIS includes descriptions of the roles values take on, how values relate to the goals of research, and considers epistemic and ethical (non-epistemic) values. Hence, the KAUVIS can more accurately represent science than the VFI, and in so doing, contextualizes information about science in relation to research goals and social needs, making science more engaging. By developing the KAUVIS to describe values, I also show that traditional information transmission models are maladapted to conveying the true value- laden nature of science. As a consequence, I examine more value-conscious communication models which I show to be enhanced by the descriptive detail of the KAUVIS. However, unveiling the inner workings of values in science may also have negative consequences for how publics interpret and engage with science. After all, exposing values in science can lead to further dispute about science. Hence, the KAUVIS opens up questions like, what (if anything) is lost by divulging values in science? My initiatory examination of the drawbacks of being explicit about values will uncover that even though there is a risk that publics may reject scientific claims, an understanding of values in science is desirable for decision-making and deliberation. In other words, a description of values can serve to clarify how they are being used, and help define what it is we are in disagreement about. Thus, by more accurately representing science and values, we might strengthen democracy by better providing publics the contextualized information they need for science to be of service.