Computability Theory and Some Applications 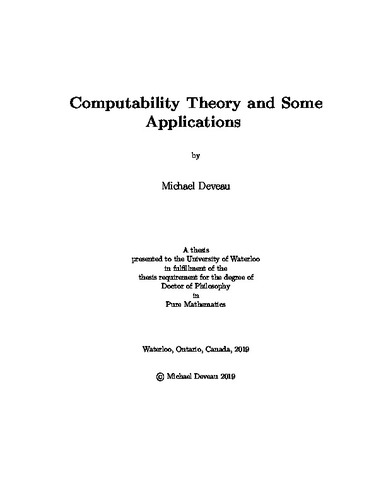 We explore various areas of computability theory, ranging from applications in computable structure theory primarily focused on problems about computing isomorphisms, to a number of new results regarding the degree-theoretic notion of the bounded Turing hierarchy. In Chapter 2 (joint with Csima, Harrison-Trainor, Mahmoud), the set of degrees that are computably enumerable in and above $\mathbf{0}^{(\alpha)}$ are shown to be degrees of categoricity of a structure, where $\alpha$ is a computable limit ordinal. We construct such structures in a particularly useful way: by restricting the construction to a particular case (the limit ordinal $\omega$) and proving some additional facts about the widgets that make up the structure, we are able to produce a computable prime model with a degree of categoricity as high as is possible. This then shows that a particular upper bound on such degrees is exact. In Chapter 3 (joint with Csima and Stephenson), a common trick in computable structure theory as it relates to degrees of categoricity is explored. In this trick, the degree of an isomorphism between computable copies of a rigid structure is often able to be witnessed by the clever choice of a computable set whose image or preimage through the isomorphism actually attains the degree of the isomorphism itself. We construct a pair of computable copies of $(\omega, <)$ where this trick will not work, examine some problems with decidability of the structures and work with $(\omega^2, <)$ to resolve them by proving a similar result. In Chapter 4, the effectivization of Walker's Cancellation Theorem in group theory is discussed in the context of uniformity. That is, if we have an indexed collection of instances of sums of finitely generated abelian groups $A_i \join G_i \cong A_i \join H_i$ and the code for the isomorphism between them, then we wish to know to what extent we can give a single procedure that, given an index $i$, produces an isomorphism between $G_i$ and $H_i$. Finally, in Chapter 5, several results pertaining to the bounded Turing degrees (also known as the weak truth-table degrees) and the bounded jump are investigated, with an eye toward jump inversion. We first resolve a potential ambiguity in the definition of sets used to characterize degrees in the bounded Turing hierarchy. Then we investigate some open problems related to lowness and highness as it appears in this realm, and then generalize a characterization about reductions to iterated bounded jumps of arbitrary sets. We use this result to prove the non-triviality of the hierarchy of successive applications of the bounded jump above any set, showing that the problem of jump inversion must be non-trivial if it is true in any relativized generality.