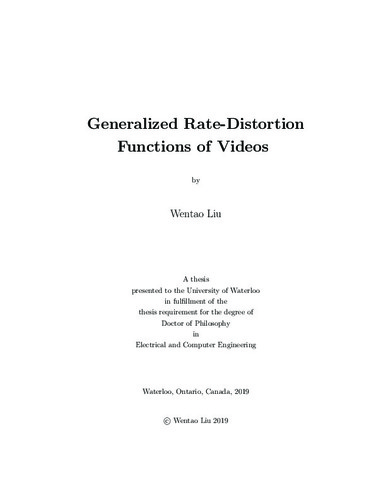 Customers are consuming enormous digital videos every day via various kinds of video services through terrestrial, cable, and satellite communication systems or over-the-top Internet connections. To offer the best possible services using the limited capacity of video distribution systems, these video services desire precise understanding of the relationship between the perceptual quality of a video and its media attributes, for which we term it the GRD function. In this thesis, we focus on accurately estimating the generalized rate-distortion (GRD) function with a minimal number of measurement queries. We first explore the GRD behavior of compressed digital videos in a two-dimensional space of bitrate and resolution. Our analysis on real-world GRD data reveals that all GRD functions share similar regularities, but meanwhile exhibit considerable variations across different combinations of content and encoder types. Based on the analysis, we define the theoretical space of the GRD function, which not only constructs the groundwork of the form a GRD model should take, but also determines the constraints these functions must satisfy. We propose two computational GRD models. In the first model, we assume that the quality scores are precise, and develop a robust axial-monotonic Clough-Tocher (RAMCT) interpolation method to approximate the GRD function from a moderate number of measurements. In the second model, we show that the GRD function space is a convex set residing in a Hilbert space, and that a GRD function can be estimated by solving a projection problem onto the convex set. By analyzing GRD functions that arise in practice, we approximate the infinite-dimensional theoretical space by a low-dimensional one, based on which an empirical GRD model of few parameters is proposed. To further reduce the number of queries, we present a novel sampling scheme based on a probabilistic model and an information measure. The proposed sampling method generates a sequence of queries by minimizing the overall informativeness of the remaining samples. To evaluate the performance of the GRD estimation methods, we collect a large-scale database consisting of more than $4,000$ real-world GRD functions, namely the Waterloo generalized rate-distortion (Waterloo GRD) database. Extensive comparison experiments are carried out on the database. Superiority of the two proposed GRD models over state-of-the-art approaches are attested both quantitatively and visually. Meanwhile, it is also validated that the proposed sampling algorithm consistently reduces the number of queries needed by various GRD estimation algorithms. Finally, we show the broad application scope of the proposed GRD models by exemplifying three applications: rate-distortion curve prediction, per-title encoding profile generation, and video encoder comparison.