Unitary Correlation Sets and their Applications 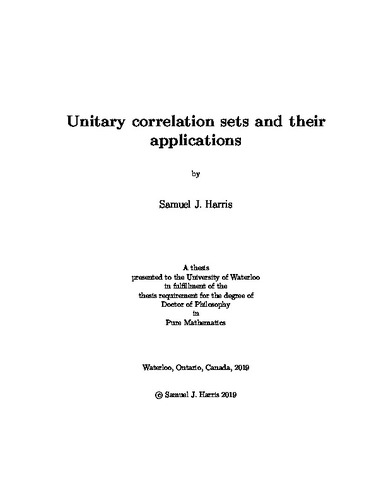 We relate Connes' embedding problem in operator algebras to the Brown algebra Unc(n), which is defined as the universal unital C*-algebra generated by the entries of an n x n unitary matrix. In particular, we show that the embedding problem is equivalent to determining whether or not the algebra Unc(n) has the weak expectation property for any (equivalently, all) n at least 2. From this perspective, we develop a theory of what we call unitary correlation sets. These sets are analogous to the usual sets of bipartite probabilistic correlations arising from the typical models in quantum information theory. We show that the analogue of the weak Tsirelson problem for unitary correlation sets is again equivalent to Connes' embedding problem. Moreover, we show that as long as Alice and Bob's unitaries are of size at least 2, the set of spatial unitary correlations is never a closed set. This result is analogous to a recent theorem of Slofstra, which states that the set of quantum probabilistic correlations is not closed, so long as the input and output sets are large enough. We also discuss several applications of the theory of unitary correlation sets. First, we show that the class of extended non-local games known as quantum XOR games is a rich enough class to detect the validity of Connes' embedding problem. That is, the embedding problem has a positive answer if and only if the value of every quantum XOR game in the commuting model agrees with the value of the game in the approximate finite-dimensional model. Second, we use a C*-algebraic analogue of the quantum teleportation and super-dense coding maps from quantum information theory to obtain separations between the tensor product model (or "quantum spatial" model) and the approximate finite-dimensional model (or "quantum approximate" model), for matrix-valued generalizations of the usual Tsirelson corrleation sets. We use some of the intermediate results to also obtain separations between the matrix versions of the finite-dimensional model (or "quantum model") and the tensor product model.