Simulation and Techno-Economic Analysis of the AChT Green Methanol Process 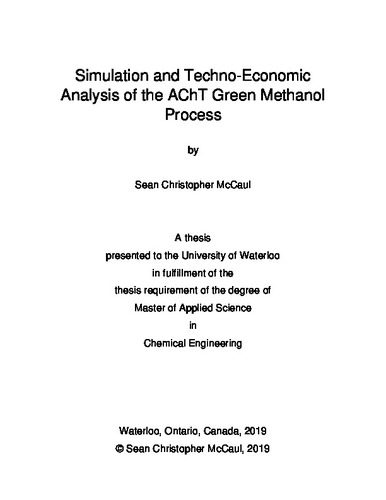 Methanol is a valuable commodity with many uses. It is used to manufacture other chemicals such as olefins, formaldehyde, and methyl-tert-butyl ether (MTBE). Methanol is also being researched as an alternative fuel for vehicles. Global methanol demand is increasing, making it a valuable chemical to manufacture. Methanol production requires three main steps: syngas production, methanol production, and methanol purification. Syngas is a mix of carbon monoxide and hydrogen that can be made through the reforming of natural gas. The production of syngas is done through many methods. Three primary methods are steam methane reforming (SMR), partial oxidation (POX), and autothermal reforming (ATR). Once syngas is produced, it is sent to a methanol reactor where three main reactions occur: the hydrogenation of CO, the hydrogenation of CO2, and the water-gas shift reaction. A product stream with methanol is then purified in using distillation. The company Technology Convergence Inc. (TCI) made a process for manufacturing methanol in 2004 called the Green Methanol Process. This process involved the use of a POX reformer and an electrolyser to provide the required hydrogen and oxygen. TCI is now known as Advanced Chemical Technologies (AChT), and they have since updated their Green Methanol Process. The new process still uses an electrolyser to generate hydrogen and oxygen, but now uses an ATR for syngas production. Aspen Plus was used in this work to simulate the updated AChT process. Heat integration was successfully implemented into the simulation. Additionally, the syngas production method was changed over from POX to ATR. An initial analysis of the amine reboiler of a CO2 capture unit was done. Finally, it was discovered that the waste stream contained a large amount of hydrogen. To remedy this, a method of hydrogen purification was studied called pressure swing adsorption (PSA). A version of the methanol process simulation was done with the PSA hydrogen recycle system added. An economic analysis looked into the OPEX and CAPEX of the process with and without PSA hydrogen recycling. Without hydrogen recycling, the CAPEX and OPEX were found to be $248 CAD/metric tonne (MT) methanol and $300 CAD/MT methanol, respectively, while producing 217 MTPD (metric tonne per day) of methanol. This resulted in a combined overall cost of $548 CAD/MT methanol produced. With hydrogen recycling, the CAPEX and OPEX were found to be $223 CAD/MT methanol and $280 CAD/MT methanol respectively, while producing 249 MTPD of methanol. This resulted in a combined cost of $503 CAD/MT methanol. Overall, it was found that the implementation of a PSA hydrogen recycle system was a good investment. Additionally, hourly Ontario electricity price (HOEP) data from 2018 were used to determine on average the most expensive consecutive 11-day period. Since the plant was planned to be shut down for 11 days for maintenance, this would inform when the best time to shut down would be to save the most on electricity. The best day to start the maintenance was found to be January 5th. The next most expensive periods started on December 4th and April 9th.