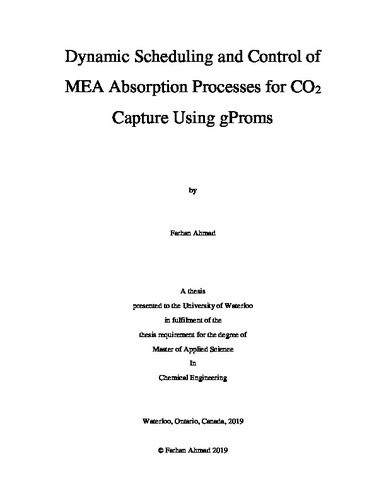 There are three general approaches for the mitigation of carbon emissions from fossil fuel fired power plants; pre-combustion, oxyfuel and post-combustion carbon capture. The post-combustion absorption process using MEA (methyl-ethanol-amine) is selected for this work due to its maturity in research and capability of it being retrofitted on existing power plants. Previous research included work on solvent development selections, model development, steady state simulation, dynamic simulation and control and optimization. A rigorous dynamic model used in this work is based on the model developed by (Nittaya, 2014) and (Harun, 2012) and includes six PI controllers implemented in gProms v5.1. 80% of the energy cost requirements by post combustion carbon capture system (PCCCS) are for the solvent regeneration. Due to the fluctuation in the electricity demand, appropriate scheduling of the PCCCS can reduce operating costs associated with carbon capture as demonstrated by (Alie, 2013). Controller performance analysis usually involves either disturbance rejection or servo-control tests but not a combination of both scenarios. Since the %CC schedule was developed to compliment a power generation schedule that generates flue-gas accordingly, this work evaluates the controller in the presence of both flue gas disturbances and %CC set-point changes simultaneously. It was found that the flue gas disturbances worked in favour of achieving the desired set-points and the controller performed better (~53%) than when evaluated without the influence of the disturbance. This work showed that tuning the controller for the intended schedule improved the response of the controller by about ~58% over the IMC tuned controller (that was estimated around similar operating conditions). It was determined that following the proposed schedule resulted in a decrease of 7% in energy consumption in comparison with capturing at a fixed capture rate. Fluctuations in the day-to-day electricity demand can be modelled using a correlation between the proposed schedule and the power generated. This work proposed a linear correlation between the two that resulted in a similar set-point schedule being generated. In conclusion, a series of PI controllers may be used to control the highly non-linear MEA based post-combustion carbon capture process provided the controllers are tuned in accordance to the set-point schedule.