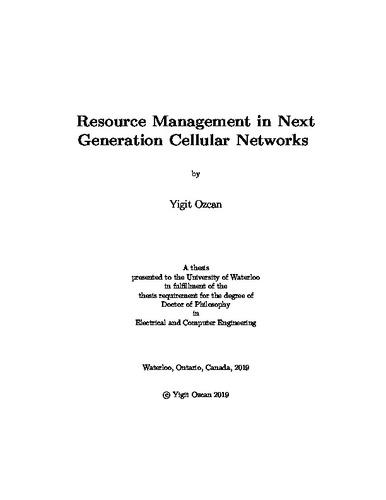 Fifth generation of cellular networks brings new challenges to the network operators as new applications create new demands. In this thesis, we will study different topics on cellular networks, explain the challenges of each topic, and propose solutions to tackle these challenges. The topics we consider are: i) uplink scheduling in multi-cell OFDMA networks, ii) downlink scheduling in multi-cell OFDMA networks, iii) full-duplex communications in cellular networks, and iv) cellular networks with intra-cellular traffic. We begin our study with uplink scheduling in 5G networks as its importance has increased in recent years and the related literature is relatively scarce. Scheduling on the uplink is a challenging task mostly due to power and interference management. In practical scenarios, each cell schedules its own users independently from the other cells. In this case, the interference that is received from the neighboring cells cannot be known since the schedules of the other cells are not known. Therefore, interference has to be estimated in order to estimate the rate of each user. When this estimation is not done properly, it can cause resource losses or under-utilization as we show in this thesis. To avoid this problem, all the cells could be scheduled simultaneously using a cloud radio access network (C-RAN) and hence we can take the exact interference into account while scheduling. Formulating the optimal multi-cell scheduler is straightforward, but it is a very large integer problem that cannot be solved easily and fast. We transform it into a more tractable upper bounding problem and solve it with an iterative algorithm. However, it is still not fast enough to be used in real time. Hence, we focus on improving the existing uplink schedulers by proposing practical solutions for the case when there is no C-RAN and for the case when a C-RAN is present. We also propose a soft frequency reuse (SFR) based scheduler that performs much better than the existing schedulers. We then perform a similar study for downlink scheduling that carries the majority of the cellular traffic today. While downlink scheduling is easier than the uplink due to simpler interference management, it is still not trivial to achieve performance comparable to the maximum achievable performance using a practical scheduler. The main contribution of this study is to show that a well-tuned SFR-based local scheduler can perform almost as well as the centralized scheduler and hence a centralized scheme for downlink might not be necessary. We next consider a cellular network where full-duplex communications (FDC) are enabled at the base stations. The coexistence of uplink and downlink transmissions in co-channel cells create new sources of interference that have to be taken into account when studying the performance of FDC. When doing so, traffic asymmetry (TA), i.e., the fact that the traffic is in general much larger on the downlink than on the uplink, should also be considered. We will show that ignoring TA biases the results in favor of FDC. We compute the performance gain that an FDC-enabled multi-cell OFDMA network has over a regular time division duplex (TDD) system considering all sources of interference and TA by formulating a multi-cell centralized scheduling problem. We use it to analyze the impact of each new source of interference as well as of TA. Our conclusion is that, FDC does not improve performance enough in a multi-cell system to warrant its added complexity in an urban setting when TA and the interference have realistic values. The verdict is slightly better in a rural setting. Furthermore, we show that heterogeneous networks can be a better choice than the homogeneous networks to deploy FDC when it is adjusted well. We finalize our study with device-to-device (D2D) communications. With the advent of smart phones, there are many new applications that create local (intra-cellular) traffic among the users in the same network. Most work in the literature focuses on the possibility to utilize a direct link between those users to by-pass the base station. Such transmissions are called D2D mode. However, implementing D2D is not easy due to difficult interference management and not knowing the required channel gains. We face a major problem while studying D2D. We need a clear benchmark to evaluate the performance of D2D mode. To this end, we focus on designing a type-aware scheduler (a scheduler that has the information on the type of traffic, which can be downlink, uplink, or intra-cellular) in a case where direct communication between users is not enabled. This scheduler can be seen as the benchmark against D2D mode. We show that performance gain can be obtained by jointly scheduling the uplink and downlink with respect to the case where the scheduler is blind to the types. We show for a homogeneous network that when the traffic types are known to a scheduler, a significant performance gain can be achieved compared to the case where the traffic types are not known. We also analyze heterogeneous networks that consist of macro cells and small cells and show that large performance gain can be obtained by performing type-aware user association jointly with user scheduling. The main contributions of the thesis are i) to analyze the performance of existing schedulers and see if they perform well enough compared to the maximum achievable performance both on the uplink and the downlink, ii) to propose enhancements or new schedulers when the existing schedulers do not perform well enough, iii) to illustrate when FDC deployment can be useful under which scenarios, and iv) to show the importance of information of traffic types when users with different types of traffic exist.