Action Mechanism and Structural Studies on the Lipopeptide Antibiotic Daptomycin 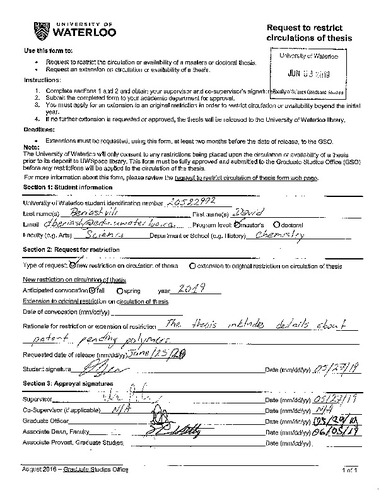 Daptomycin (dap) is calcium-dependent lipopeptide antibiotic that is used clinically to treat systemic infections caused by Gram-positive pathogens. It is thought that dap brings about its antimicrobial effect by binding cytoplasmic bacterial membranes, via a calcium meditated interaction with the lipid phosphatidylglycerol (PG), and subsequent oligomerization. There is consensus that dap oligomerization is required for bactericidal activity, but the exact mechanism by which dap oligomers cause cell death is contested. Significant experimental evidence suggests that dap oligomers form cation-selective pores that cause membrane depolarization halting metabolite transport and resulting in cell death. Other proposed action modes include dap-induced non-selective membrane permeabilization, lipid extraction, and dislodgement of membrane-associated biosynthetic enzymes. The effect of phospholipids acyl tails on dap cation-selective pore formation has not been studied. In this thesis, fluorescence spectroscopy experiments on large unilamellar vesicles were used to study the effects of phospholipid acyl tails on dap cation-selective pore formation in a systematic fashion. It was observed that dap could permeabilize membranes composed of equal parts PC and PG with myristoyl acyl tails, but not those containing palmitoyl and oleoyl acyl tails. Oleoyl lipid acyl tails were found to render membranes insusceptible to dap pore formation regardless of the headgroup they were ligated to and at low concentrations in the membrane (10 mol%). Further studies showed that inhibition of dap pore formation by phospholipid acyl tails is correlated with increased acyl tail length rather than lipid unsaturation. Oleoyl acyl tails were found to restrict dap pore formation by disrupting the final stage of oligomer assembly. Attempts to permeabilize oleoyl lipid acyl tail containing membranes by branching and increasing the length of dap’s acyl tail moiety were unsuccessful. Overall, these findings suggest that lipid acyls affect dap’s action mode and should be a major consideration when designing model membrane systems for future dap action mode studies. Determining dap’s membrane-bound structure at an atomic level would help resolve the debate in literature regarding its action mode and establish dap’s structure-activity relationship. Previous attempts to determine the membrane-bound structure by solution-state nuclear magnetic resonance have failed because no suitable membrane mimetic existed. The latter portion of this thesis investigated the suitability of novel styrene-maleic acid (SMA) co-polymers to create membrane nanodisc suitable for determining dap’s membrane-bound structure. Through dynamic light scattering, fluorescence spectroscopy, and solution-state NMR it was found that this polymer can form membrane nanodiscs, with a diameter small enough for structural studies by solution-state NMR, in the presence of PG (50 mol%) and 3 mM calcium. Further, these PG containing nanodiscs allow for partially dap oligomerization, and are stable on the timescale of NMR experiments. Overall, while the SMA polymer used in this study did not allow for full dap oligomerization, the partial structure of membrane-bound dap could be obtained with this system by solution-state NMR.