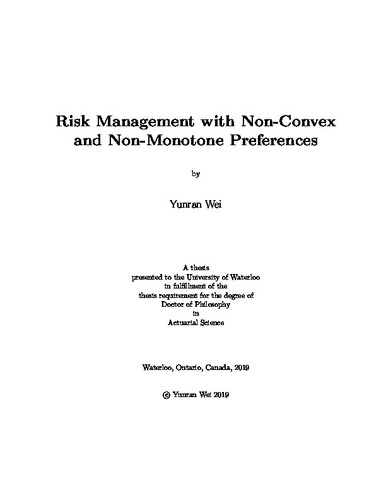 This thesis studies two types of problems, the theory of risk functionals and the risk sharing problem. We put a special focus on a class of non-monotone law-invariant risk functionals, called the signed Choquet integrals. The contribution can be seen as three portions. The first portion of this thesis contains various results on signed Choquet integrals. A functional characterization via comonotonic additivity is established, along with some theoretical properties including six equivalent conditions for a signed Choquet integral to be convex. We proceed to address two practical issues currently popular in risk management, namely, robustness (continuity) issues and risk aggregation with dependence uncertainty, for signed Choquet integrals. Our results generalize in several directions those in the literature of risk functionals. From the results obtained in this chapter, we see that many existing elegant mathematical results in the theory of risk measures hold for the general class of signed Choquet integrals; thus they do not rely on the assumption of monotonicity. In the second portion, we analyze the “convex level sets” (CxLS) property of risk functionals, which is a necessary condition for the notions of elicitability, identifiability, and backtestability, popular in the recent statistics and risk management literature. We put the CxLS property in the context of multi-dimensional risk functionals. We obtain two main analytical results in dimension one and dimension two, by characterizing the CxLS property of all one-dimensional signed Choquet integrals, and that of all two-dimensional signed Choquet integrals with a quantile component. Using these results, we proceed to show that a comonotonic-additive coherent risk measure is co-elicitable with a Value-at- Risk if and only if it is a convex combination of the mean and the corresponding Expected Shortfall. The new findings generalize several results in the recent literature and partially answer an open question on the characterization of multi-dimensional elicitability. In the third portion, we study a risk sharing problem. Unlike classic risk sharing problems based on expected utilities or convex risk measures, quantile-based risk sharing problems exhibit two special features. First, quantile-based risk measures (such as the Value-at-Risk) are often not convex, and second, they ignore some part of the distribution of the risk. These features create technical challenges in establishing a full characterization of optimal allocations, a question left unanswered in the literature. In this paper, we address the issues on the existence and the characterization of (Pareto-)optimal allocations in quantile-based risk sharing problems. It turns out that negative dependence, mutual exclusivity in particular, plays an important role in the optimal allocations, in contrast to positive dependence appearing in classic risk sharing problems. As a by-product of our main finding, we obtain some results on the optimization of the Value-at-Risk and the Expected Shortfall.