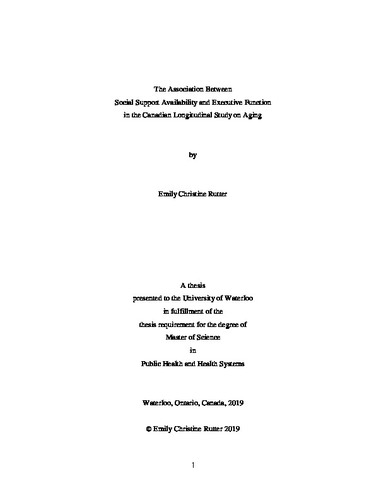 While an aging population is a good indication of advances being made in health and life expectancy, demographic change presents new concerns for public health. An older population faces different challenges than a younger one, including an increase in the proportion of the population at risk for age-related declines in cognitive function. This is of particular concern given the importance of cognition in everyday functioning and adaptation to change. Although most risk factors of cognitive decline are determined in early life or develop over the lifespan, some may still be altered in late life. Social support has been previously investigated as a potential area of intervention and has been positively associated with many health outcomes in later life, including cognitive function. However, the role of perceived social support availability (SSA) has not been investigated in depth. Specifically, the relationship between different subtypes of SSA and specific domains of cognitive function—such as executive function—is not well understood. This is particularly true for the association between low levels of different types of SSA and lower cognitive function. This study utilized cross-sectional baseline data from the comprehensive cohort of the Canadian Longitudinal Study on Aging (CLSA). The CLSA is an ongoing prospective cohort study looking at community-dwelling adults who were between the ages of 45 and 85 years at recruitment. The 30,097 participants in the comprehensive cohort were selected from volunteers living within 25-50 km of one of the 11 different data collection sites across seven provinces. Multiple cognitive measures were used to assess executive function, a key domain of cognition required for controlling behaviour, planning, and purposeful decision making. Bivariate and logistic regression analyses were completed to assess the associations between SSA and executive function. SSA was operationalized using a measure of functional support, which assesses the subjective experience of support—how much support an individual perceives as available to them when needed. This study builds upon previous research which has largely depended on structural definitions of support—such as marital status and number of relatives—that are more readily available in large population-based studies, but may be less accurate in assessing how much support participants actually receive when needed. Specific aims of the current study were to investigate whether low SSA (overall and subtypes: tangible, affection, emotional/informational, and positive social interactions) is associated with executive function after stratifying for sex and adjusting for potential confounders (i.e., age group, province, education, household income, urban/rural residence, depression, self-rated health, chronic conditions, marital status, pet ownership, and loneliness). After accounting for said covariates, low affection SSA, emotional/informational SSA and positive social interactions were significantly associated with low executive function in the non-stratified analyses. In women, low tangible SSA and low positive social interactions were also significantly associated with low executive function, as was low emotional/informational SSA in married women. No subtype of SSA was significant in male models after the inclusion of all covariates. These findings add to existing evidence that psychological and social factors play a role in mid- to later-life and indicate that SSA—particularly specific subtypes—may be beneficial to cognitive function in middle-aged and older adults. Increasing awareness of, and access to, available SSA resources may be one potential strategy to buffer against age-related cognitive decline. By utilizing multiple time points, future work with longitudinal data can build upon the current results by establishing temporality and further investigating the association between specific subtypes of SSA and executive function over time.