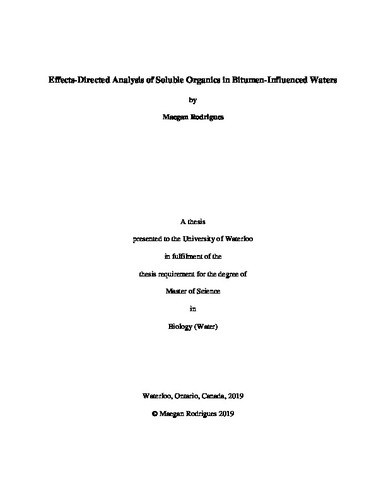 Identification of the organic compounds of concern within bitumen-influenced waters is critical for effective monitoring and reclamation within Canada’s oil sands region. Effects-directed analysis (EDA) is a tool used to identify the toxic compound(s) in toxic mixtures through means of mixture fractionation, and biological and chemical analyses. Bioactive polar organic fractions (1°F3) from natural and industrial bitumen-influenced water sources (Aged oil sands process affected water (OSPW) – 1, OSPW Influenced Groundwater (GW) – 1, Natural GW – 1, and Natural GW – 2) subjected to a first tier EDA, were further fractionated in a second tier using reverse-phase high-performance liquid chromatography (HPLC). Four secondary fractions (2°F1, 2°F2, 2°F3, 2°F4), separated by polarity, were created along with a recombined treatment (2°FR) of the secondary fractions for sites OSPW influenced GW – 1, and Natural GW – 2. Toxicity was assessed using the Microtox® assay and Hyallela azteca due to sensitivities exhibited to the first tier EDA fraction. Due to the volume restraints of the second tier EDA analysis, a low-volume test method (50 mL and 10 organisms) was developed for the Hyalella azteca, which was a 4 – 8-fold volume reduction in comparison to standardized methods (200 – 400 mL and 15 – 20 organisms). Parallel tests of the low-volume method and standard method were completed to compare LC50s with two inorganic standards (KCl and CdCl2) and two organic solutions (naphthenic acid fraction component (NAFC) 2009 and NAFC 2011). Finally, chemical analysis of primary and secondary fractions was completed in positive and negative electrospray ionization (ESI) mode on a liquid chromatography quadrupole time of flight mass spectrometer (LC-QToF/MS). For the proposed Hyalella azteca low-volume test method, there was no evidence the LC50 values for KCl, NAFC 2009, and NAFC 2011 were different (p = 0.34, 0.73, and 0.48), however, there was some evidence the LC50 values for CdCl2 was different (p = 0.037). The percent difference between LC50 values were less than 1 – fold for KCl, NAFC 2009, and NAFC 2011, and was 2 – fold for CdCl2. Due to percent differences below 3 – fold, and 95% confidence intervals (CI) which overlap, the low-volume method is determined to be an acceptable replacement for standardized methods in testing situations with access to minimal volumes of solution. The Microtox® and reduced volume H. azteca assays were most sensitive to the polar organics of the primary fractions and secondary fraction recombined treatments. The toxicity response to the primary fraction was not observed in any of the individual secondary fractions, however, 2°FR from OSPW Influenced GW – 1 for the Microtox® assay (40% viability) elicited a comparable response to the 1°F3 (29% viability, p = 0.07). Additionally, there was no difference from Natural GW – 2 2°FR to 1°F3 (29 % viability) of the Microtox® assay (40% viability, p = 0.054) and the 1°F3 (0% survival) of the H. azteca assay (0% survival, p = 1.00). For the V. fischeri there were no obvious trends in the toxicity of the individual secondary fractions between sources but 2°F3 and 2°F4 had the greatest response within groundwater sites. Similarly, for the H. azteca there was no toxicological response in the individual secondary fractions, save for 2°F4 in the groundwaters: OSPW Influenced GW – 1 (78% survival), Natural GW – 1 (62% survival), and Natural GW – 2 (47% survival). The LC-QToF/MS total ion chromatograms (TICs) of the secondary fractions, were less complex in comparison to the primary fractions, but remain too chemically complex for compound identification. Additionally, the fraction profiles were distinguishable from the others with some degree of overlap between adjacent fractions. In conclusion, the lack of recoverable toxicity in the individual secondary fractions may indicate that there are interactive effects within the more complex mixtures of polar organics (e.g. 1°F3, 2°FR fractions) that lead to greater toxic potency than when the chemical components are separated into less complex mixtures (e.g. individual secondary fractions). Or, perhaps, the compounds driving the toxicity are split between adjacent fractions, below their response thresholds. Additionally, due to the complexity of the secondary fractions identified by the LC-QToF, another tier of EDA is required to analyze unknowns. It is therefore recommended that this second tier of EDA must be reinvestigated such that the secondary fractions are combined with their adjacent fraction.