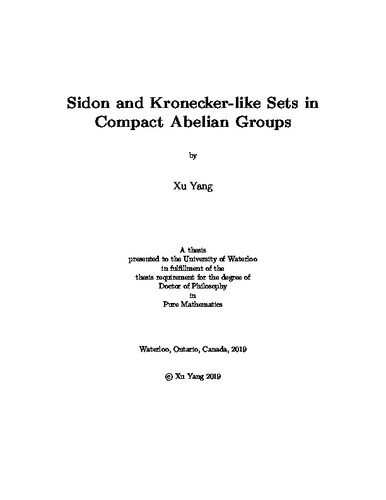 Let $G$ be a compact abelian group and $\Ga$ be its discrete dual group. In this thesis we study various types of interpolation sets. A subset $E \subset \Ga$ is Sidon if every bounded function on $E$ can be interpolated by the Fourier transform of a finite complex measure. Sidon sets have been extensively studied, and one significant breakthrough, that Sidonicity is equivalent to proportional quasi-independence, was proved by Bourgain and Pisier during the early 80s. In this thesis we will give a detailed demonstration of Pisier's approach. We also seek for possible extensions of Pisier's theorems. Based on Pisier's techniques, we will show Sidonicity is equivalent to proportional independence of higher degrees and minimal constants. A subset $E \subset \Ga$ is $\e$-Kronecker if every function on $E$ with range in the unit circle can be interpolated by a continuous character on $\Ga$ with an error of $\e$. We will prove some interesting properties of $\e$-Kronecker sets and give an estimation of the Sidon constant of such sets. Generalizations of Kronecker sets include binary Kronecker sets and $N$-pseudo-Rademacher sets. We compute the binary Kronecker constants of some interesting examples. For $N$-pseudo-Rademacher sets, we give a characterization of such sets, describe their structures and prove the existence of large $N$-pseudo-Rademacher sets.