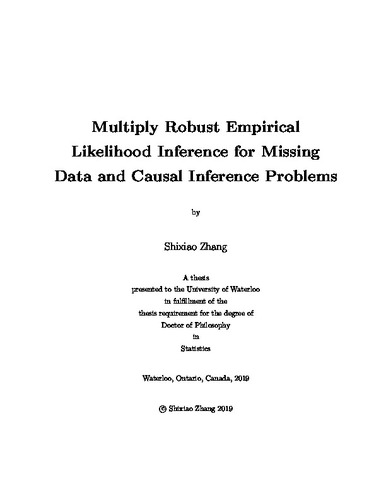 Missing data are ubiquitous in many social and medical studies. A naive complete-case (CC) analysis by simply ignoring the missing data commonly leads to invalid inferential results. This thesis aims to develop statistical methods addressing important issues concerning both missing data and casual inference problems. One of the major explored concepts in this thesis is multiple robustness, where multiple working models can be properly accommodated and thus to improve robustness against possible model misspecification. Chapter 1 serves as a brief introduction to missing data problems and causal inference. In this Chapter, we highlight two major statistical concepts we will repeatedly adopt in subsequent chapters, namely, empirical likelihood and calibration. We also describe some of the problems that will be investigated in this thesis. There exists extensive literature of using calibration methods with empirical likelihood in missing data and causal inference. However, researchers among different areas may not realize the conceptual similarities and connections with one another. In Chapter 2, we provide a brief literature review of calibration methods, aiming to address some of the desirable properties one can entertain by using calibration methods. In Chapter 3, we consider a simple scenario of estimating the means of some response variables that are subject to missingness. A crucial first step is to determine if the data are missing completely at random (MCAR), in which case a complete-case analysis would suffice. We propose a unified approach to testing MCAR and the subsequent estimation. Upon rejecting MCAR, the same set of weights used for testing can then be used for estimation. The resulting estimators are consistent if the missingness of each response variable depends only on a set of fully observed auxiliary variables and the true outcome regression model is among the user-specified functions for deriving the weights. The proposed testing procedure is compared with existing alternative methods which do not provide a method for subsequent estimation once the MCAR is rejected. In Chapter 4, we consider the widely adopted pretest-posttest studies in causal inference. The proposed test extends the existing methods for randomized trials to observational studies. We propose a dual method to testing and estimation of the average treatment effect (ATE). We also consider the potential outcomes are subject to missing at random (MAR). The proposed approach postulates multiple models for the propensity score of treatment assignment, the missingness probability and the outcome regression. The calibrated empirical probabilities are constructed through maximizing the empirical likelihood function subject to constraints deducted from carefully chosen population moment conditions. The proposed method is in a two-step fashion where the first step is to obtain the preliminary calibration weights that are asymptotically equivalent to the true propensity score of treatment assignment. Then the second step is to form a set of weights incorporating the estimated propensity score and multiple models for the missingness probability and the outcome regression. The proposed EL ratio test is valid and the resulting estimator is also consistent if one of the multiple models for the propensity score as well as one of the multiple models for the missingness probability or the outcome regression models are correctly specified. Chapter 5 extends Chapter 4's results to testing the equality of the cumulative distribution functions of the potential outcomes between the two intervention groups. We propose an empirical likelihood based Mann-Whitney test and an empirical likelihood ratio test which are multiply robust in the same sense as the multiply robust estimator and the empirical likelihood ratio test for the average treatment effect in Chapter 4. We conclude this thesis in Chapter 6 with some additional remarks on major results presented in the thesis along with several interesting topics worthy of further exploration in the future.