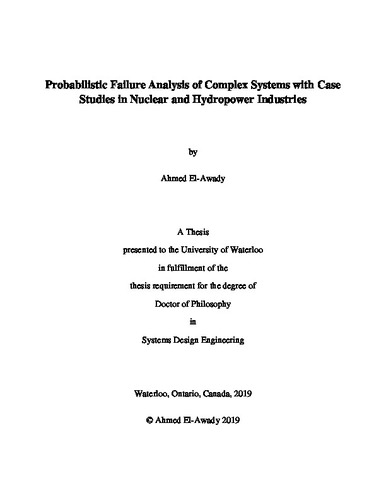 Detailed Monte-Carlo simulation of a complex system is the benchmark method used in probabilistic analysis of engineering systems under multiple uncertain sources of failure modes; such simulations typically involve a large amount of CPU time. This makes the probabilistic failure analysis of complex systems, having a large number of components and highly nonlinear interrelationships, computationally intractable and challenging. The objective of this thesis is to synthesize existing methods to analyze multifactorial failure of complex systems which includes predicting the probability of the systems failure and finding its main causes under different situations/scenarios. Bayesian Networks (BNs) have potentials in probabilistically representing complex systems, which is beneficial to predicting the systems failure probability and diagnosing its causes using limited data, logic inference, expert knowledge or simulation of system operations. Compared to other graphical representation techniques such as Event Tree Analysis (ETA) and Fault Tree Analysis (FTA), BNs can deal with complex networks that have multiple initiating events and different types of variables in one graphical representation with the ability to predict the effects, or diagnose the causes leading to a certain effect. This thesis proposes a multifactor failure analysis of complex systems using a number of BN-based approaches. In order to overcome limitations of traditional BNs in dealing with computationally intensive systems simulation and the systems having cyclic interrelationships (or feedbacks) among components, Simulation Supported Bayesian Networks (SSBNs) and Markov Chain Simulation Supported Bayesian Networks (MCSSBNs) are respectively proposed. In the latter, Markov Chains and BNs are integrated to acquire analysis for systems with cyclic behavior when needed. Both SSBNs and MCSSBNs have the distinction of decomposing a complex system to many sub-systems, which makes the system easier to understand and faster to be simulated. The efficiency of these techniques is demonstrated first through their application to a pilot system of two dam reservoirs, where the results of SSBNs and MCSSBNs are compared with those of the entire system operations simulation. Subsequently, two real-world problems including failure analysis of hydropower dams and nuclear waste systems are studied. For such complex networks, a bag of tools that depend on logically inferred data and expert knowledge and judgement are proposed for efficiently predicting failure probabilities in cases where limited operational and historical data are available. Results demonstrate that using the proposed SSBN method for estimating the failure probability of a two dam reservoir system of different connections/topologies results in probability estimates in the range of 3%, which are close to those coming from detailed simulation for the same system. Increasing the number of states per BN variables in the states’ discretization stage makes the SSBN results converge to the simulation results. When Markov chains are integrated with SSBN (i.e. MCSSBN), the results depend on the MCSSBN approach that is used according to the scenarios of interest that need to be included in the BN representation. Evidence of system failure can be used to diagnose the main contributors to the failure (i.e. inflow, reservoir level, or defected gates). This posterior diagnostic capability of the BN is distinctive for the real world case studies presented in this thesis. In Mountain Chute Dam that is operated by Ontario Power Generation, the main contributors to system failure, according to the logically inferred data and expert knowledge, are inadequate discharge capacity of the sluiceway, electromechanical equipment failure, head gates failure, non-safe ice loading, high inflow, high rain/precipitation, sluice gate failure, and high water pressure. While for the Nuclear Waste Management system, the main contributors to system failure according to the known and assumed data are due to high pressures and bentonite failures. In summary, modelling, validating, and developing appropriate modifications of the BN method for applications in complex systems failure analysis is the major contribution of this thesis.