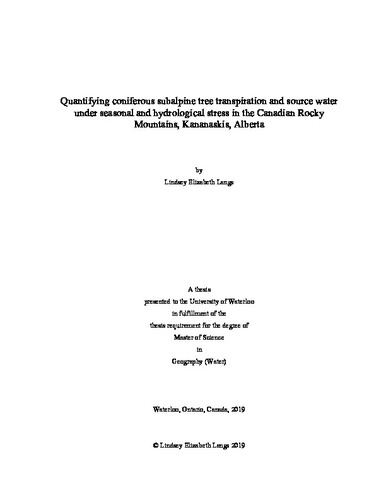 Fresh water supplies in mountainous regions are at risk as snow and ice stores continue to decline under rising global temperatures, earlier winter snowmelt and changing climate regimes. Alpine forests are of particular importance due to their hydrological connectivity within watersheds controlling groundwater base flow, influencing evapotranspiration (ET) and snow storage dynamics. A change in the water availability to subalpine vegetation via changes in winter snowpack accumulation and quantities or differing summer precipitation (P) regimes could have a drastic effect on the long-term health of these forests. This makes it imperative to understand and quantify their hydrological connectivity within these watersheds. Study sites located at Fortress Mountain in Kananaskis, Alberta are composed of co-occurring coniferous tree stands of Abies lasiocarpa and Picea engelmannii. Little is known about water use dynamics of these species at high elevations, specifically the quantity and timing of transpiration (T) in addition to the water sources most important for T during the entire length of the growing season. This study used a combination of hydrological and meteorological tools to address coniferous subalpine tree water use behaviours before, during and after the growing season (June-September). Methodologies focussed on determining seasonal T patterns using the non-invasive stem-heat balance method to determine sap flow and eddy covariance to capture stand ET. The source water of the studied trees was determined using δ18O and δ2H stable water isotopes and further partitioned using the MixSIAR Bayesian Mixing Model (BMM). Groundwater monitoring wells, soil tensiometers, P gauges, and meteorological stations were used to determine baseline environmental conditions. Stable water isotopes δ18O and δ2H were collected from all source waters (P, snow cover, soil water, groundwater) in addition to xylem water samples from the coniferous trees within the study area. Understanding tree response to P and drying events was the main objective addressed, yielding stark differences between the growing seasons of 2016 and 2017. Stand T was higher in 2017 (165 mm) than 2016 (118 mm) despite a much drier and warmer season (155 mm of rain in 2017 compared to 283 mm in 2016). A deeper, sustained snowpack in 2017 coupled with higher net radiation allowed for higher T rates. Paired with δ18O and δ2H stable isotope source partitioning, this study was able to identify soil water as the most important source to season-long tree productivity, with groundwater the most important for early growing season. Well-drained soils and shallow depth to bedrock inhibited groundwater access for the studied trees after the snowmelt period concluded. Thus soil moisture supplied a majority of water to the tree population during mid growing season, determined both hydrometrically and isotopically. Dry conditions in 2017 showed a clear trend between soil moisture levels and tree water use, with 2016 having almost double the soil moisture and tree productivity in the tail end of the growing season. By closely examining the patterns of subalpine tree water use, we can begin to clarify how these important ecosystems services will be impacted under a changing climate in addition to helping us better manage our forest and freshwater resources.