Holes & Notches: Creating a Framework to Promote Agency for the Elderly in Baeksa Village 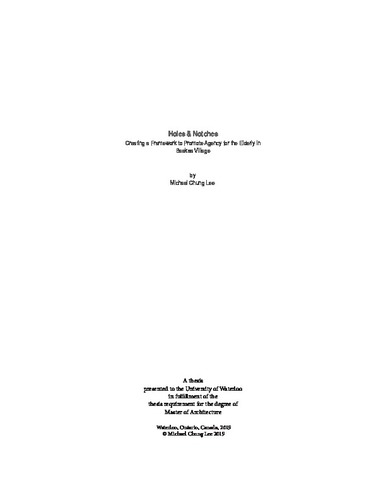 The demographic landscape of developed countries around the world is rapidly shifting. Populations are increasingly aging yet birthrates are declining. These changes are particularly pronounced in South Korea, where by 2050 the old-age dependency ratio, a ratio between those over 65 and those under 65, will increase from 20% to 70% which is 20% higher than the projected rate of other developed countries.1 Given the ratio of those retiring and those working in South Korea, the question of how to link productivity with the elderly is becoming an urgent issue. The liabilities of the nursing homes are also increasing. There has been a decrease in intergenerational support, low funding in the long-term care insurance policy and qualitative issues with elderly housing.2 Therefore, a long-term reliance on institutional care and pension systems is not a sustainable solution. The question of self-sufficiency in a time of rapid change is not new: the same question occurred in the 1970’s during a socioeconomic shift of similar scale. Rapid urbanization brought modern amenities that vastly improved living standards in South Korea. Apartments, institutionalized education and white-collar jobs became the cornerstone of a modernized Korea. However, during urbanization there were many who did not fit the new status quo of modern living. Those who were poor, elderly or not in positions of power lacked social mobility to adapt to a rapidly changing Korea. In order to adapt, these groups built impromptu settlements, markets and structures to create for themselves jobs, food and homes to remedy a disconnect between their own skills and the changing socioeconomic landscape. Qualitative issues with institutional care combined with the unsustainability of welfare programs calls for a solution that relies on a similar approach of self-governance. This thesis seeks to create opportunities for the elderly to regain autonomy and gain agency in the community through a building framework that negotiates the traditions of Baeksa Village and the new residential development. This project is situated in Baeksa Village, which is located in Seoul, South Korea. One of the last village communities in Seoul, it is a site with a primarily elderly population and unique village characteristics. It was built in the 1970’s by inhabitants whose homes were expropriated to build new infrastructure. It was originally created as an illegal settlement and the village itself is a collection of self-made housing. Currently the site is under redevelopment plans to build new housing units. However, only two thirds are to be redeveloped as apartment complexes while one third of the site is to be renovated with village characteristics to remember the history of the village, protect its unique settlement patterns and to provide social housing to its inhabitants. Baeksa Village offers a potent site that intersects with both historical and contemporary socioeconomic landscapes. This thesis explores the spatial relationships between the new and the old, the apartment and the village, the working and the retired, the institutional and the impromptu to create a mutually productive and evolving dialogue between education, housing, and self-made structures. This project proposes for a new type of low assistance elderly housing that can encourage the creation of self-made structures. A series of columns, screens and beams acts as a framework to encourage and organize the building of impromptu structures. The project anticipates that impromptu structures will develop over time and is designed in phases. A geriatric care school is integrated in the design to provide mutually beneficial communal support between students and the elderly. Students in training provide low-cost help, facilitate a hub for student community and create shared public spaces as a way to combat loneliness and social isolation experienced by the elderly. A constant flow of students works in tandem with the needs of the elderly while training geriatric professionals to gain real life practical experience. The two programs feed into the impromptu structural framework creating a dynamic and self-sufficient community.