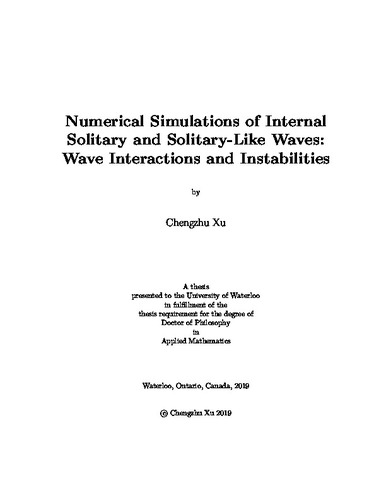 Internal solitary and solitary-like waves (ISWs) are commonly observed in stably stratified fluids such as the Earth's atmosphere and oceans. As these waves interact with other physical processes and/or move through a varying background environment, they may change their form and possibly become unstable. In this thesis, we study ISWs using high-resolution direct numerical simulations and address three major topics: the interaction of ISWs with short waves, the onset of shear instability in ISWs, and the dynamics of ISWs in a shear background current induced by basin-scale standing internal waves. The first topic examines the behavior of short internal waves as they propagate through large-amplitude ISWs. A key finding is that for waves that are short in comparison to the ISW width, the interaction leads to an almost complete destruction of the short waves, but that longer waves are able to maintain their structure after the interaction. The destruction of short waves occurs primarily due to the velocity shear induced by the ISW, which alters the vertical structure of the short waves so that significant wave activity is found only on the upstream side of the ISW crest (i.e. the deformed pycnocline). These results suggest that through the interaction with waves of relatively smaller length scale, ISWs can provide a means to decrease the power observed in the short-wave band in the coastal ocean. The second topic focuses on the onset and growth of shear instability in ISWs, which is particularly important for the diapycnal mixing in open waters. The complexity of instability onset in ISWs is due to the finite length and the non-parallel structure of the wave-induced high-shear region. We examine large-amplitude ISWs with a flat crest and show that, depending on the ratio of the length of high shear region and the width of the wave, there are cases in which instability can occur spontaneously, cases in which its onset is Reynolds number dependent, and cases in which instability does not occur spontaneously but must be triggered by small, but finite amplitude noise. The amplitude of the noise has a crucial influence on the instability growth, regardless of its spatial structure. In the final topic we study the effect of a shear background current on the dynamics of ISWs by investigating the interaction of ISWs with basin-scale standing internal waves. The ISWs are generated using a lock-release mechanism, while the seiches are created using a tilted tank suddenly returned to the upright position, both of which are readily realizable in a laboratory. In most cases, the wave forms of ISWs in the simulations match those described by the fully nonlinear theory, implying that in laboratory experiments ISWs propagating in a shear background current can be generated in a similar manner. In some circumstances, however, the presence of a shear background current prevents the formation of ISWs, but enables the formation of a finite amplitude dispersive wave train, even when the pycnocline center is not close to the mid-depth.