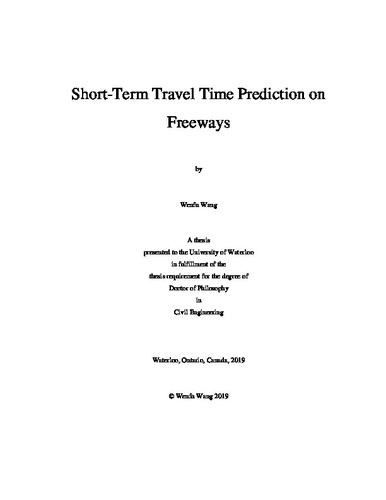 Short-term travel time prediction supports the implementation of proactive traffic management and control strategies to alleviate if not prevent congestion and enable rational route choices and traffic mode selections to enhance travel mobility and safety. Over the last decade, Bluetooth technology has been increasingly used in collecting travel time data due to the technology’s advantages over conventional detection techniques in terms of direct travel time measurement, anonymous detection, and cost-effectiveness. However, similar to many other Automatic Vehicle Identification (AVI) technologies, Bluetooth technology has some limitations in measuring travel time information including 1) Bluetooth technology cannot associate travel time measurements with different traffic streams or facilities, therefore, the facility-specific travel time information is not directly available from Bluetooth measurements; 2) Bluetooth travel time measurements are influenced by measurement lag, because the travel time associated with vehicles that have not reached the downstream Bluetooth detector location cannot be taken at the instant of analysis. Freeway sections may include multiple distinct traffic stream (i.e., facilities) moving in the same direction of travel under a number of scenarios including: (1) a freeway section that contain both a High Occupancy Vehicle (HOV) or High Occupancy Toll (HOT) lane and several general purpose lanes (GPL); (2) a freeway section with a nearby parallel service roadway; (3) a freeway section in which there exist physically separated lanes (e.g. express versus collector lanes); or (4) a freeway section in which a fraction of the lanes are used by vehicles to access an off ramp. In this research, two different methods were proposed in estimating facility-specific travel times from Bluetooth measurements. Method 1 applies the Anderson-Darling test in matching the distribution of real-time Bluetooth travel time measurements with reference measurements. Method 2 first clusters the travel time measurements using the K-means algorithm, and then associates the clusters with facilities using traffic flow model. The performances of these two proposed methods have been evaluated against a Benchmark method using simulation data. A sensitivity analysis was also performed to understand the impacts of traffic conditions on the performance of different models. Based on the results, Method 2 is recommended when the physical barriers or law enforcement prevent drivers from freely switching between the underlying facilities; however, when the roadway functions as a self-correcting system allowing vehicles to freely switching between underlying facilities, the Benchmark method, which assumes one facility always operating faster than the other facility, is recommended for application. The Bluetooth travel time measurement lag leads to delayed detection of traffic condition variations and travel time changes, especially during congestion and transition periods or when consecutive Bluetooth detectors are placed far apart. In order to alleviate the travel time measurement lag, this research proposed to use non-lagged Bluetooth measurements (e.g., the number of repetitive detections for each vehicle and the time a vehicle spent in the detection zone) for inferring traffic stream states in the vicinity of the Bluetooth detectors. Two model structures including the analytical model and the statistical model have been proposed to estimate the traffic conditions based on non-lagged Bluetooth measurements. The results showed that the proposed RUSBoost classification tree achieved over 94% overall accuracy in predicting traffic conditions as congested or uncongested. When modeling traffic conditions as three traffic states (i.e., the free-flow state, the transition state, and the congested state) using the RUSBoost classification tree, the overall accuracy was 67.2%; however, the accuracy in predicting the congested traffic state was improved from 84.7% of the two state model to 87.7%. Because traffic state information enables the travel time prediction model to more timely detect the changes in traffic conditions, both the two-state model and the three-state model have been evaluated in developing travel time prediction models in this research. The Random Forest model was the main algorithm adopted in training travel time prediction models using both travel time measurements and inferred traffic states. Using historical Bluetooth data as inputs, the model results proved that the inclusion of traffic states information consistently lead to better travel time prediction results in terms of lower root mean square errors (improved by over 11%), lower 90th percentile absolute relative error ARE (improved by over 12%), and lower standard deviations of ARE (improved by over 15%) compared to other model structures without traffic states as inputs. In addition, the impact of traffic state inclusion on travel time prediction accuracy as a function of Bluetooth detector spacing was also examined using simulation data. The results showed that the segment length of 4~8 km is optimal in terms of the improvement from using traffic state information in travel time prediction models.