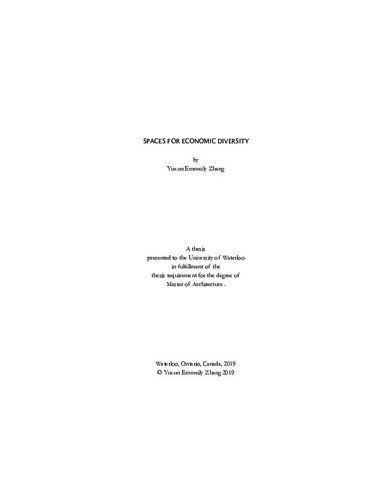 The discipline of architecture operates within the organizing structure of the economy and is directly influenced by its flows and cycles. The fabric of the city is often a product of profit-pursuing goals, resulting in spaces prioritizing exchanges comprised only of monetary values. These spaces, however, are not built for exchanges based in other values that are meaningful to the lives of the occupants. Currently, these diverse and enriching exchanges are limited to private spaces such as homes, resulting in a built environment that spatially contributes to the separation of peoples’ everyday lives and the capitalist economy. Utilizing J.K Gibson-Graham’s theoretical framework of economic diversity, which asserts that non-capitalist and alternative forms of exchanges underpin the capitalist economy, this thesis explores Toronto’s employment and residential land use zoning designations as a physical manifestation of the divide between the understanding of value and peoples’ lives. By investigating the conditions resulting from current zoning by-laws within the city of Toronto through this lens, architecture can be expanded beyond a capitolocentric view and instead, examined as both a participator and a container for a more diverse economy. The thesis is located within the suburbs of Toronto that are often made of segregated and homogenous built fabric. By examining currently existing adjacency typologies between these spaces of work and home, as well as nearby suburban residential lots, the thesis conceives of a zoning overlay that amends the land use categories of employment and residential. The design proposes a network fostering economic diversity that is comprised of a new right-of-way mediating the space between employment lands and residential lots, interlinked with additions or renovations to existing warehouses and homes. Rethought processes of making, land ownership, and spatial qualities generate a heterogeneous built environment in the suburbs that can host the currently undervalued diverse exchanges beyond the private realm. These spaces of economic diversity will act as catalysts for restructuring the social relationships of work and value production, progressing towards increasingly interdependent, interconnected communities.