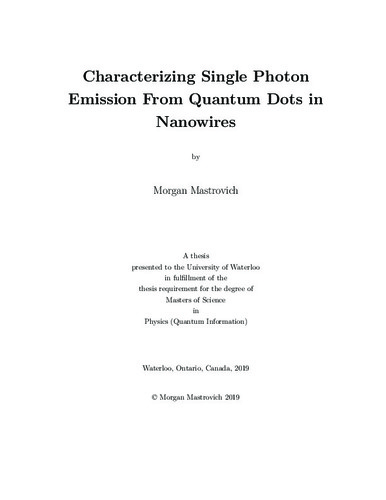 Bright sources of highly indistinguishable single photons are desirable for diverse applications in quantum technology, including quantum cryptographic protocols, information processing, and metrology. The most common single photon source for quantum optical experiments is currently spontaneous parametric downconversion (SPDC); quantum dot sources have the potential to greatly exceed the brightness of these current sources, without compromising the quality of the emitted photons. Embedding a quantum dot within a tapered nanowire waveguide greatly increases the photon extraction efficiency. Exciting a two-photon resonant transition decreases the emission time jitter, improving both the multi-photon suppression and indistinguishability. Before this work, these two techniques have not yet been implemented together. We implemented two-photon resonant excitation (TPRE) for the first time in nanowire-embedded quantum dots; we found that it significantly improved the multi-photon suppression. However, we were unable to measure the indistinguishability due to low counts and instabilities in the experimental apparatus. Nevertheless, we have identified the significant improvements that are still required in order to successfully measure the indistinguishability under TPRE; with these improvements, the measurement should be possible for future group members. We successfully measured the indistinguishability under a quasi-resonant excitation, but did not find a significant difference when comparing to the measurement made on a similar quantum dot under above-bandgap excitation. We must also substantially improve the single photon count rate in order to approach the polarization entanglement rates of SPDC sources. Despite these challenges, nanowire-embedded quantum dots remain a promising source of both single and entangled pairs of photons.