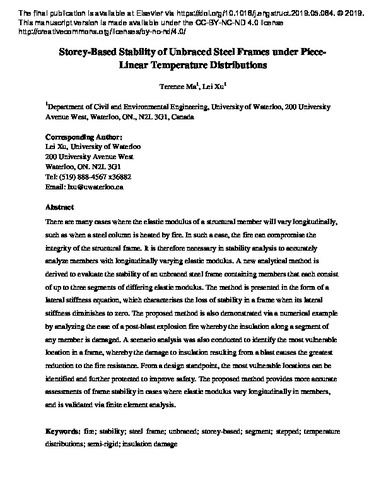 There are many cases where the elastic modulus of a structural member will vary longitudinally, such as when a steel column is heated by fire. In such a case, the fire can compromise the integrity of the structural frame. It is therefore necessary in stability analysis to accurately analyze members with longitudinally varying elastic modulus. A new analytical method is derived to evaluate the stability of an unbraced steel frame containing members that each consist of up to three segments of differing elastic modulus. The method is presented in the form of a lateral stiffness equation, which characterises the loss of stability in a frame when its lateral stiffness diminishes to zero. The proposed method is also demonstrated via a numerical example by analyzing the case of a post-blast explosion fire whereby the insulation along a segment of any member is damaged. A scenario analysis was also conducted to identify the most vulnerable location in a frame, whereby the damage to insulation resulting from a blast causes the greatest reduction to the fire resistance. From a design standpoint, the most vulnerable locations can be identified and further protected to improve safety. The proposed method provides more accurate assessments of frame stability in cases where elastic modulus vary longitudinally in members, and is validated via finite element analysis.