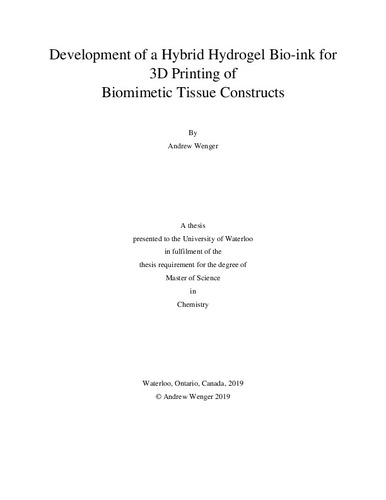 Colorectal cancer is the 2nd most common form of cancer in Canada. Most colorectal cancer deaths are caused by complications that stem from the metastasis of colorectal cancer to other organs such as the liver. During metastasis, the extravasation step of the metastasis cascade involves the attachment of circulating tumour cells to the endothelial cell layer that coats the inside of human blood vessels and the eventual migration of the cells past this layer. Current tumour extravasation models, used for drug and mechanistic studies, do not accurately reflect the microenvironments found in the human body. Three dimensional bioprinting has become an attractive method to produce extravasation models. This thesis explores the development of a hybrid hydrogel bio-ink consisting of alginate, GelMA and cellulose nanocrystals to create cell scaffolds that can support the growth of a monolayer of endothelial cells. A bio-ink consisting of 2 wt% alginate, 4 wt% GelMA and 6 wt% cellulose nanocrystals was chosen for printability studies and cellular studies for its high shear thinning and low hysteresis in viscosity recovery. Scaffolds designed to mimic a human blood vessel and villi structures in a healthy colon were printed and EA-hy 926 cells were seeded on top. After six days and an additional seeding of cells it was found that the bio-ink could not sustain the growth of a complete mono-layer of EA-hy 926 cells. The high electrostatic repulsion between the negatively charged cell membrane and the negatively charged alginate and cellulose nanocrystals is thought to play a role in the ability of the cells to attach to the scaffold surface. Scaffold treated with poly(L-lysine) were made and EA-hy-926 cells were again seeded on top. This resulted in better cell distribution, but increased instances of cellular elongation suggested a decrease in cellular adhesion. In both poly(L-lysine) treated and un-treated scaffolds the cells were able to attach and proliferate on top of the scaffolds suggesting that with some changes in either the bio-ink’s formula, cell seeding densities or post printing treatments a mono layer of cells could be formed to be used in the production of extravasation models of colorectal cancer.