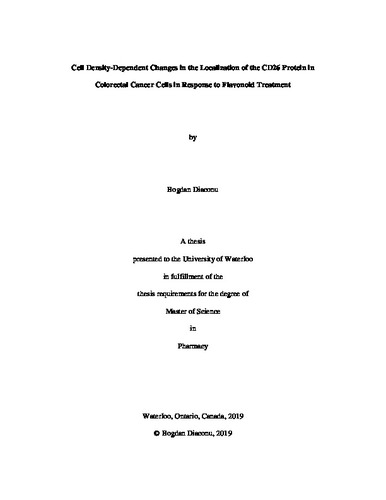 Colorectal cancer is the 3rd most common cancer worldwide and this rate of incidence is largely attributable to lifestyle factors such as the diet. A group of plant secondary metabolites called flavonoids has been found to exert various anticancer activities in colorectal cancer cell lines and is indeed thought to function similarly in vivo. The cell-surface enzymes CD26, CD38, and CD73 are present in colorectal cancers and their presence and activities in this context have the potential to be modulated by extracellular factors such as dietary flavonoids. The levels of CD26 protein in particular have been previously found to increase at the cell surface in HT-29 colorectal cancer cells following treatment with the flavonoid apigenin. Another extracellular factor which may alter the response of cancer cells is cell density. In this work, the role of apigenin was investigated first on the mRNA transcription of CD26, CD38, and CD73 in HT-29 cells cultured to increasing degrees of confluence. CD26 was identified as the most promising target because it revealed the greatest degree of mRNA variability. Next, the amount of CD26 mRNA and protein was quantified in HT-29 cells treated with apigenin and the related flavonoids genistein, kaempferol, and luteolin. Finally, the localization of CD26 protein was observed in these cells following flavonoid treatment. This investigation showed no consistent changes in either mRNA expression or whole cell protein abundance for CD26. However, there was a distinct change in cellular localization of CD26 in response to apigenin and genistein and this was seen particularly in colorectal cancer cells at low levels of confluence. The relocation of the CD26 protein may depend on particular features of the flavonoid structure. Furthermore this effect appears be modulated by a change in cell confluence. Therefore this study provides new insights with respect to the role of flavonoids in regulating CD26 in colorectal cancer cells.

Bogdan Diaconu (2019). Cell Density-Dependent Changes in the Localization of the CD26 Protein in Colorectal Cancer Cells in Response to Flavonoid Treatment. UWSpace. http://hdl.handle.net/10012/14717