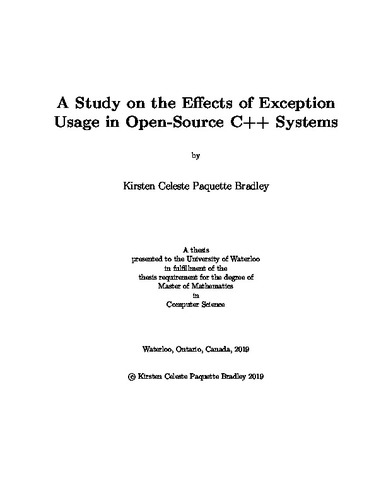 Exception handling (EH) is a feature common to many modern programming languages, including C++, Java, and Python, that allows error handling in client code to be performed in a way that is both systematic and largely detached from the implementation of the main functionality. However, C++ developers sometimes choose not to use EH, as they feel that its use increases complexity of the resulting code: new control flow paths are added to the code, "stack unwinding'' adds extra responsibilities for the developer to worry about, and EH arguably detracts from the modular design of the system. In this thesis, we perform an exploratory empirical study of the effects of exceptions usage in 2721 open source C++ systems taken from GitHub. We observed that the number of edges in an augmented call graph increases, on average, by 22% when edges for exception flow are added to a graph. Additionally, about 8 out of 9 functions that may propagate a throw from another function. These results suggest that, in practice, the use of C++ EH can add complexity to the design of the system that developers must strive to be aware of.