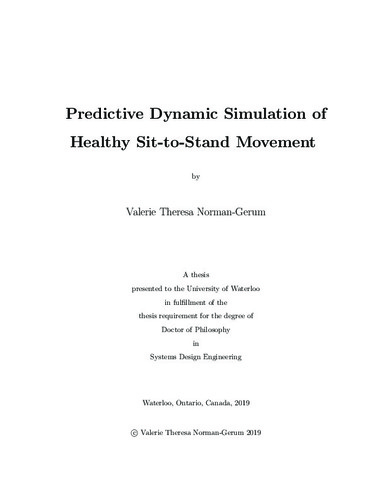 This thesis situates itself at the intersection of biomedical modelling and predictive simulation to synthesize healthy human sit-to-stand movement. While the importance of sit-to-stand to physical and social well-being is known, the reasons for why and how people come to perform sit-to-stand the way we do is largely unknown. This thesis establishes the determinants of sit-to-stand in healthy people so that future researchers may investigate the effects of compromised health on sit-to-stand and then explore means of intervening to preserve and restore this motion. Previous researchers have predicted how a person rises from seated. However aspects of their models, most commonly contact and muscle models, are biomechanically inconsistent and restrict their application. These researchers also have not validated their prediction results. To address these limitations and further the study of sit-to-stand prediction, the underlying themes of this thesis are in biomechanical modelling, predictive simulation, and validation. The goal of predicting sit-to-stand inspired the creation of three new models: a model of biomechanics, a model of motion, and performance criteria as a model of preference. First, the human is represented as three rigid links in the sagittal plane. As buttocks are kinetically important to sit-to-stand, a new constitutive model of buttocks is made from experimental force-deformation data. Ten muscles responsible for flexion and extension of the hips, knees, and ankles are defined in the model. Second, candidate sit-to-stand trajectories are described geometrically by a set of Bézier curves, for the first time. Third, with the assumption that healthy people naturally prioritize mechanical efficiency, disinclination to a motion is described as a cost function of joint torques, muscle stresses, and physical infeasibility including slipping and falling. This new dynamic optimization routine allows for motions of gradually increasing complexity, by adding control points to the Bézier curves, while the model's performance is improving. By comparing the predictive simulation results to normative sit-to-stand as described in the literature, for the first time, it is possible to say that the use of these models and optimal control strategy together has produced motions characteristic of healthy sit-to-stand. This work bridges the gap between predictive simulation results and experimental human results and in doing so establishes a benchmark in sit-to-stand prediction. In predicting healthy sit-to-stand, it makes a necessary step toward predicting pathological sit-to-stand, and then to predicting the results of intervention to inform medical design and planning.