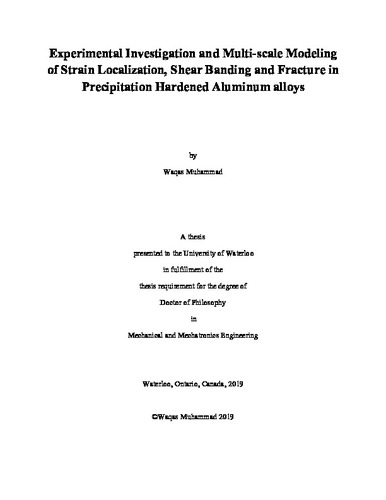 Finite element (FE) simulations are widely used in automotive design processes to model the forming and crashworthiness behavior of structural materials. Comprehensive material characterization and the availability of suitable constitutive models are prerequisites for accurate modeling of these operations. Numerical modeling of formability and crashworthiness is complex as it involves large deformations, instability, ruptures, damage propagation, and fracture. The effectiveness of computer-aided engineering (CAE) based design and performance evaluations significantly depends on the ability of numerical models to predict the material work hardening behavior, flow localization and fracture. This thesis presents a combined experimental and numerical study to explore microstructure property relationships involving strain localization, shear banding and fracture in precipitation hardened aluminum alloys. More specifically, the AA6xxx series aluminum alloys are of key interest for automotive applications, requiring good formability, hemmability and crash energy absorption characteristics. The goal of this work is to enhance the existing experimental understanding and modeling capabilities with respect to strain localization, shear banding and fracture in AA6xxx series precipitation hardened aluminum alloys, through development and coupling of multiscale modeling frameworks with advanced constitutive models for material work hardening and failure. In these regards, a crystal plasticity based constitutive hardening model is developed to account for the intragranular backstresses that arise from the formation of deformation induced dislocation substructure in precipitation hardened aluminum alloys. Based on thorough experimental investigation, it is learned that the substructure starts as pinned dislocation tangles with some regions having relatively high dislocation content while others being virtually dislocation free. With persistent deformation the substructure evolves into a well defined equiaxed cell/subgrain structure with majority of dislocations being trapped at the subgrain cell wall boundaries. The substructure induces intragranular backstresses due to blockage of dislocation passage leading to the experimentally observed Bauschinger effect at the macroscopic scale. The proposed hardening model accounts for these induced stresses and successfully predicts the experimentally measured flow behavior during cyclic simple shear and cyclic TCT and CTC loadings of AA6063. More importantly, the new backstress hardening model successfully reproduces the experimentally observed Bauschinger effect upon loading reversal. It is further shown that the crystallographic texture evolves significantly during cyclic simple shear deformation and the model successfully predicts the experimentally observed texture evolution. The study reveals that for proper prediction of flow behavior and the experimentally observed Bauschinger effect in precipitation hardened aluminum alloys, a physically motivated model that can account for the induced internal stresses, must be employed to describe material hardening on a polycrystalline level. Next, a multiscale modeling approach is developed where a macro-scale component level simulation is performed using conventional phenomenological plasticity and the boundary conditions of the region of interest are extracted and applied to the crystal plasticity based finite element model to account for the relevant microstructural physics. The proposed approach is successfully validated by simulating wrap-bending deformation of AA6063 and by comparing the observed texture evolution, slip band formation within grains, through thickness strain localization and the development of surface roughness with corresponding experimental data. The proposed approach enhances existing modeling capabilities for better predictability of material response under complex loading paths. After developing the multiscale framework, a new constitutive approach is developed to predict failure by extending the existing nano-void theory of ductile failure to precipitation hardened aluminum alloys by accounting for the effects of precipitation induced dislocation substructure on point defect generation. A new evolution law for the effective obstacle strength associated with substructure evolution is incorporated into the formulation. The proposed failure criterion is successfully validated against experimental data and its versatility is demonstrated by coupling the failure criterion with stress-strain data generated through crystal plasticity simulations, to predict failure strain for arbitrary loading – stress triaxiality conditions. Next, a comprehensive experimental investigation is performed to study the relationship between microstructure, plastic deformation and fracture behavior of precipitation hardened aluminum alloy AA6016 during bending. It is shown that the bendability of AA6016 alloy is limited by the formation of severe surface undulations and surface cracking, which are associated with the heterogenous nature of slip concentrating into coarse slip bands and intense shear banding originating from surface low cusps in the form of mutually orthogonal transgranular bands. Micro-cracks originate from low cusp regions along the outer tensile surface and propagate along the intensely sheared planes within shear bands. Results show that grains with S texture component are prone to shear banding and failure during bending and the contrary is true for Cube oriented grains. It is observed that intergranular micro-void nucleation and crack propagation is favored in areas with high grain boundary misorientations and intense slip band impingements along boundaries, perhaps due to the reduction in local cohesive strength of such boundaries. Finally, the developed multiscale modeling approach in conjunction with the newly developed hardening and failure models for age-hardenable aluminum alloys are applied to predict the experimentally observed shear banding and fracture behavior of AA6016 during bending. The simulated results successfully predict the experimentally observed shear banding and the predominant transgranular fracture behavior. It is shown that the advancing crack tip alternates from a less critical localization condition to a more critical one, as it requires lesser energy for the creation of new fracture surfaces while still sustaining the imposed plastic deformation. It is observed that Copper, Brass and Cube texture components show good resistance to shear banding and are therefore characterized as high bendability components, whereas the contrary is true for the S texture component. Lastly, the coupled numerical framework, presented herein, provides an excellent tool for CAE, virtual material characterization and analysis of microstructure-property relationships.