A Journey to Shora: Expressing the Architectural Environment Behind A Door into Ocean 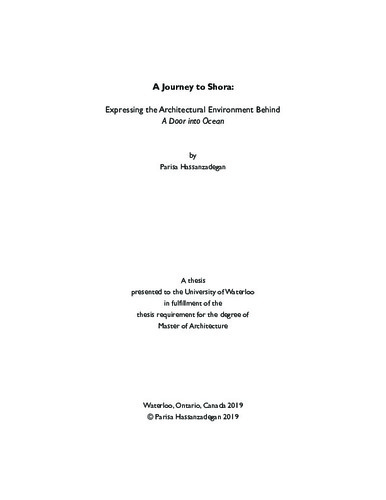 This thesis seeks to express the architectural environment behind Joan Slonczewski’s 1986 science-fiction novel, A Door into Ocean. The novel describes a water-covered planet called Shora; its inhabitants, Sharers; and their alternative way of life on living rafts. Building on Slonczewski’s writing, I present a series of digital paintings and a narrative to express what living on Shora’s rafts might feel like for its residents. Using case studies of existing projects and research into the world of living architecture and biodesign, I situate this project within contemporary architecture, attempting to envision how it might feel to occupy a world of living things. Life is characterized by the ability to evolve, metabolize, and reproduce. Throughout history, human attempts to provide a safe living environment have led us to a separation between the built environment and nature. With today’s environmental concerns, it is imperative for us to consider visionary approaches to imagine a living, instead of a non-living, architecture. Inspiration from and use of the living world in design is encompassed within a large body of work by designers and researchers. Biomimicry (mimicking features or behaviours of living things), biodesign (synthesizing new hybrid typologies by using living organisms as the main elements of the built environment), living and soft-living architecture (using living organisms or lively matters in design), and ecological design (minimizing design’s environmentally destructive impacts through integration with living processes) overlap and inform the efforts of many working in the field. These attempts at living architecture, however, remain mostly at a small scale in laboratories or at the scale of installations or concept designs. As the field grows, it is important to envision how the techniques being developed in smaller scales can affect a new way of life in the future. I am particularly interested in representing how architecture might go beyond biomimicry and use living organisms as the main elements of the built environment as described in Shora. A Door into Ocean is a compelling critique of human life, achieved through “rejecting the terrestrial” and refusing totalitarianism and dictatorship, all seen in Sharers’ way of life harmonized with their aquatic environment. Acting as a robust ecosystem for many different marine species without threatening their lives, Shora might represent the future biodesigners dream about. The Sharers use genetic engineering to enable the coexistence of different living materials and their hastened evolution as needed. They use scaffolding and weaving techniques to create semi-permanent structures covered with living organisms. Finally, they modify their own bodies to further adapt to their environment. Through all these techniques, the world in A Door into Ocean combines biodesign and living architecture to arrive at a balanced ecological approach to life with the natural world. Shora is a work of science fiction, set on a fictional planet. Arriving at Shora’s architecture today requiring systematic changes not just to our architectural systems, but also to sociopolitical issues. Shora can, however, act as a window to a possible alternative vision. In this way, my role as the architect is to express this world through drawings and narratives. Through this exercise of expressing the imagined, we might get closer to answering larger questions about living architecture: What is the quality of an architecture merged with nature? What are the characteristics of this kind of architecture? How does it feel to live in such a world?

Parisa Hassanzadegan (2019). A Journey to Shora: Expressing the Architectural Environment Behind A Door into Ocean. UWSpace. http://hdl.handle.net/10012/14695