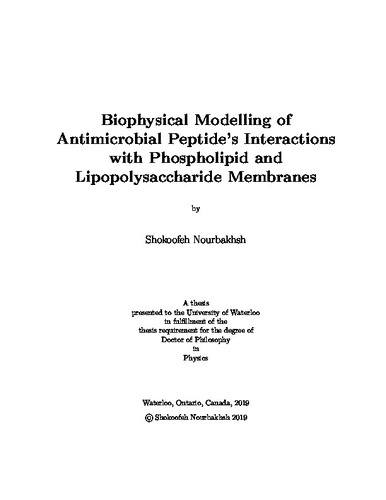 Antimicrobial peptides (AMPs) are naturally-occurring peptide antibiotics. The way they work has inspired a vigorous search for optimized peptide antibiotics for fighting resistant bacteria. Cationic AMPs cleverly utilize their electrostatic interactions with the bacterial membrane to selectively attack bacteria. Here, we first present a physical model of membrane selectivity of these peptides. For this, we use model membranes: phospholipid bilayers, possibly carrying a certain fraction of anionic lipids. The simultaneous presence of several competing effects (e.g., lipid demixing and peptide-peptide interactions), however, poses a serious challenge to theoretical analysis. We first examine critically various models of peptide-membrane interactions and map out one, which incorporates adequately these competing effects as well as the geometry of various regions in membranes, occupied by bound peptides, anionic lipids within the interaction range of each peptide, and those outside this range. This leads to a systematically-improved model for peptide selectivity. Using the model, we relate the peptide’s intrinsic (cell-independent) selectivity to an apparent, cell-dependent one, and clarify the relative roles of peptide parameters and cell densities in determining their selectivity. A natural consequence of this relationship is that the selectivity is more sensitive to peptide parameters at low cell densities; as a result, the optimal peptide charge, at which the selectivity is maximized, increases with the cell density such that this notion becomes less meaningful at high cell densities. It also enables us to map out intrinsic selectivity from apparent (cell-dependent) one or biologically-relevant one from “conveniently-measured” selectivity. This effort will benefit our endeavour in optimizing the peptide parameters for their enhanced selectivity in a physiological environment. We extend our effort to examine peptide adsorption on the outer membrane (OM) of Gram-negative bacteria (e.g., Escherichia coli). In particular, we focus our effort on developing a model for the interaction between AMPs and the wild-type lipopolysaccharide (LPS) layer in a biologically relevant medium, containing monovalent and divalent salt ions like Mg2+. This requires a non-trivial generalization of an earlier coarse-grained model, in which the effects of oligosaccharide and O-antigen chains are ignored. In our model, these effects are captured by modelling the LPS layer as forming a polymer brush on top of its anionic phosphate groups. Using this model, we examine how the presence of oligosaccharide and O-antigen chains modifies the binding of antimicrobials to the LPS layer. Our results demonstrate that the presence of the saccharide brush reduces the number of hydrophobically- bound peptides to the polymer-grafted interface of LPS, compared to the deep-rough LPS layer that lacks the polymer brush. Our LPS brush model predicts ∼ 30% reduction of peptide adsorption, which is consistent with recent experimental measurements. This can be attributed to the steric hindrance of the brush or the excluded-volume interaction of the saccharide chains with peptides. At a low cell density limit, we also note that the total number of peptides trapped within the brush is very small, compared to the number of bound peptides on the LPS interface. This implies that the hydrophobic binding of peptides is insensitive to brush lengths. This, however, does not exclude the possibility of kinetic slowing-down of the binding.