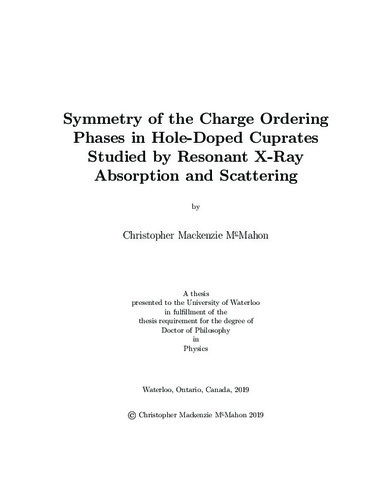 In the underdoped cuprates, superconductivity coexists with a rich variety of other electronic orders. Understanding the nature of these orders, how they interact with one another, and the mechanisms that produce them is key to understanding the electronic behaviour of this important class of quantum materials. In this dissertation, we report on the results from three novel experiments that used resonant x-ray spectroscopy to explore the symmetry of the charge density wave (CDW) and other phases in La- and Y-based cuprates. For the uninitiated reader, a brief theoretical description of the experimental methods is also provided. Theoretical proposals have suggested that CDW order in the cuprates may adhere to a d-symmetry form factor, where charge on the O sites surrounding Cu in the CuO2 planes modulates out of phase and produces a quadrupolar local environment. This is supported by STM measurements in Bi2Sr2CaCu2O8+x and Ca2-xNaxCuO2Cl2 and resonant x-ray scattering in YBa2Cu3O6+x (YBCO). We conduct our own resonant scattering measurements on La1.875Ba0.125CuO4 and find evidence for a monopolar CDW, confirmed at both the O and Cu absorption edges where the measurement selectively probes the respective in-plane orbitals. Studying the (0 0.31 L) CDW peak at the Cu edge in YBCO, we again find the same result. Furthermore, using an alternative measurement geometry that is more sensitive to the symmetry of the CDW, we are able to contrast our results against a previous study that was limited by experimental accuracy. Finally, we find a surprisingly different symmetry at the (0.31 0 L) peak in YBCO that indicates the presence of orbital order alongside simple charge order. Model calculations for this data propose a CDW with significant in-plane anisotropy, or perhaps with a modulating orbital orientation. Anisotropy in electronic structure that arises from strong correlations-classified as electronic nematicity-has been observed in multiple cuprates, and whether or not this electronic ordering phase should be suspected as a generic feature of the underdoped phase diagram has become a topic of debate. Exploiting a unique structural distortion in the La-based cuprates, we perform anisotropic tensor scattering (ATS) on resonance in samples with a variety of isovalent and heterovalent dopings to investigate the relationship between structure, CDW order, and electronic nematic order. In four of the five samples, we observe a temperature evolution that is distinct from the structural distortion in the spectra that corresponds to orbitals in the CuO2 plane, indicating the presence of an electronic nematic phase. Like CDW order, this phase often onsets at the same temperature as the structural distortion, or else below the base temperature of our spectrometer. However, the CDW is clearly seen to onset at a moderately lower temperature than the other phases in La1.65Eu0.2Sr0.15CuO4, revealing an enhancement in the electronic nematicity at TCDW. We argue that the extent of the tilt in the structural transition, which varies with the unit cell volume, could provide an underlying connection between the properties of the three phases. In an attempt to observe evidence of an electronic nematic state in YBCO, polarized near-edge x-ray absorption spectroscopy is performed at the Cu L and O K edges in three samples that span the material's doping phase diagram: delta = 0.335, delta = 0.5, and delta = 0.999. We argue that electronic nematicity could be observed as a relative change in the temperature evolution of the unoccupied density of states projected along the crystal's a- and b-axes, perhaps as the spontaneous increase of anisotropy below a threshold temperature. We report a modest reduction and broadening of many peaks in the spectra as temperature increases, including at both absorption edges, all dopings, and all polarizations. Alternatively, the peaks associated with the upper Hubbard band and the twin peaks in the c-axis spectra increase. Substantial spectral weight also appears in the region just below the upper Hubbard band. We propose that phonon coupling through a Franck-Condon mechanism could be responsible for the latter effect. The x-ray linear dichroism is calculated between the a- and b-axis spectra, but only subtle changes to the anisotropy are apparent. Ultimately, the presence of an electronic nematic phase cannot be verified, and our results instead provide an upper-limit for the magnitude of any effects from such a phase on the absorption spectra.