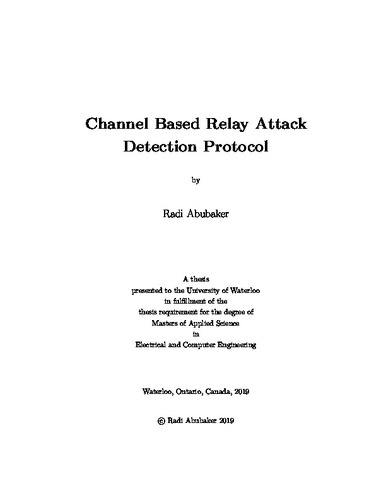 A relay attack is a potentially devastating form of a man-in-the-middle attack, that can circumvent any challenge-response authentication protocol. A relay attack also has no known cryptographic solution. This thesis proposes the usage of reciprocal channel state information in a wireless system to detect the presence of a relay attack. Through the usage of an open source channel state information tool, a challenge-response authentication Channel Based Relay Attack Detection Protocol is designed and implemented using IEEE 802.11n (WiFi) in detail. The proposed protocol adapts ideas from solutions to other problems, to create a novel solution to the relay attack problem. Preliminary results are done to show the practicality of using channel state information for randomness extraction. As well, two novel attacks are proposed that could be used to defeat the protocol and other similar protocols. To handle these attacks, two modifications are given that only work with the Channel Based Relay Attack Detection Protocol.