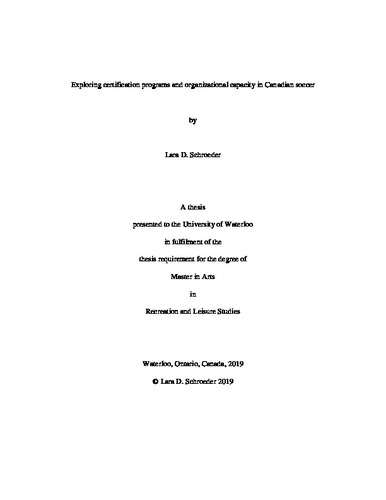 Assisting member organizations to achieve certification standards is becoming an activity of interest to many governing bodies who seek to develop capacity within their sport (Van Hoecke, Schoukens & De Knop, 2013). Certification programs aim to both promote and validate organizational development while standardizing programs, policies, and procedures. Sport-based certification is growing as an international phenomenon (e.g., Nichols & Taylor, 2015; Perck, Van Hoecke, Westerbeek, and Breesch, 2016; Relvas, Littlewood, Nesti, Gilbourne & Richardson, 2010). A growing number of governing bodies across Canada are implementing certification through multi-sport or single sport certification programs, either designed and delivered through internal programs or by external agencies. Sport organizations face increasing pressure to professionalize and standardize their program delivery and operations (Van Hoecke et al., 2013). Certification schemes represent one means of quality assurance, yet engaging in certification requires extensive investment of time, resources, and energy which may already be limited in amateur sport organizations (Cope, Haq, Garside, Pannell & Gooders, 2014). There are anecdotal claims of efficacy in implementation, but there has been minimal empirical investigation of certification within the academic literature. Therefore, the purpose of the current study is to explore the factors influencing the development and adoption of club-based certification programs in Canadian soccer. The study is framed by key tenets of institutional theory, recognizing that organizations are highly influenced by their environments and affected by institutional pressures (Washington & Patterson, 2011). As well, the study explores how institutional-level learning theories explain the implementation of the program within the Canadian soccer context (Haunschild & Chandler, 2008). Finally, multidimensional frameworks of organizational capacity (Hall et al., 2003; Misener & Doherty, 2009; Doherty et al., 2014) are examined to understand what dimensions of organizational capacity are required to implement or adopt the program, and how the program is perceived to build organizational capacity for CSOs. This study involves a qualitative investigation of the development and initial stages of implementation of the Canada Soccer Club Licensing Program, a nationally and provincially delivered, four-level program designed to guide community clubs toward best principles for organizational development (Canada Soccer, 2018). 22 in-depth, one-on-one interviews were conducted with representatives from four provincial and territorial soccer associations (PTSOs), four community soccer organizations from each of the interviewed PTSOs, and three staff from the national soccer organization. Miles, Huberman, and Saldana’s (2014) analysis methods of first and second cycle qualitative coding were utilized to analyze the data. Analysis of the data revealed several motivations for implementing and Club Licensing Program. The NSO was motivated to change the culture of Canadian soccer delivery, to standardize and build accountability for the delivery of soccer, and strengthen the sport, while acknowledging that one size does not fit all. PTSOs’ motivations resulted in six subthemes relating to leadership and system alignment. CSOs’ motivations for adopting the program included the desire to be measured by ‘the same stick’, gaining legitimacy among key stakeholders, strengthening organizational development, and feeling pressure to adhere. In order to position and promote the Club Licensing Program, the NSO and PTSOs targeted messaging to each audience, supported clubs to build capacity, incentivized adoption, and discussed consequences of non-participation or non-achievement. The human resources, infrastructure and process, and external relationships capacity dimensions were found to be most needed or leveraged to implement or adopt the Club Licensing Program. Finally, certification was perceived to positively influence CSOs’ ability to achieve their missions by enabling organizational development and offering a mechanism for differentiation among CSOs, but also perceived to negatively influence CSOs’ ability to achieve their missions because certification is not worth the effort. The study offers timely insight into the development and current delivery of the Club Licensing Program with implications for the role of certification programs more broadly. As well, the study offers governing body practitioners insight into the considerations that should be made when developing a certification program.