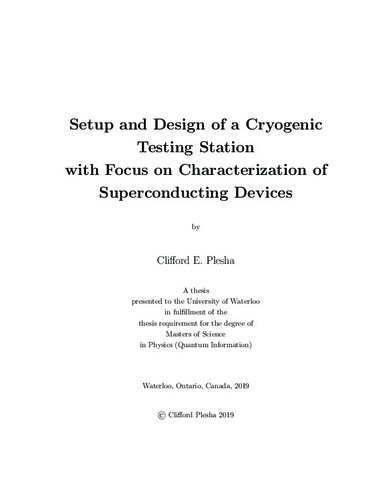 The goal of my thesis was to construct a general purpose cryostat, capable of measuring multiple devices at 100mK. This included modifying an existing SHASTA model 106 Adiabatic Demagnetization Refrigerator (ADR) by adding a new physical support structure to allow for more weight to be added to the cryostat’s testing stages, as well as custom pieces of electronics, such as a room temperature programmable current source. This allowed for computer programs to be written so we could automate the data acquisition process. We successfully measured multiple superconducting quantum interference devices (SQUIDs), with the goal of proving that our custom electronics were able to control and record the output of the SQUID. This included measuring the biasing conditions of the SQUID with the automated current sources, as well as measuring the noise temperature of a SQUID down to 300mK. Furthermore, we measured the thermal conductivity of our new sup- port structure for the cryostat and were able to prove that the material used was new and novel approach for high strength, low thermal conductivity in cryogenic research. We also investigated a new technique in permanently modifying the operational frequency of a SQUID, and were able to show that this new method of laser ablating the input coil could successfully shift the frequency. While the focus of cryogenic testing was on SQUIDs the cryostat itself was designed in such a way such that many types of low temperature devices could be tested within the system.

Clifford Plesha (2019). Setup and Design of a Cryogenic Testing Station with Focus on Characterization of Superconducting Devices. UWSpace. http://hdl.handle.net/10012/14687