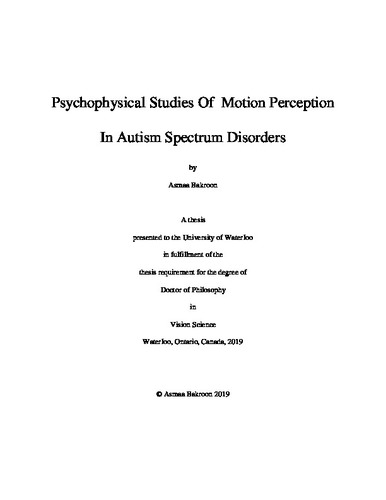 Introduction Studies have shown considerable evidence of visual dysfunction in Autism Spectrum Disorders (ASD). Motion perception research in ASD reports a superior performance in processing motion information of fine details and neglects global information. However, there are many variabilities in these experimental results, particularly in adults with autism. Several theories have been put forward as the underlying cause(s) of motion deficits in autism. These include: enhanced local domain information processing at early visual area V1; abnormal processing at the higher visual cortical area MST including V5/MT; and/or abnormal functional and structural connectivity between and within cortical networks that are recruited during different motion processing tasks. In this study, we used multiple motion perception tasks in order to activate different visual neural networks that may contribute to perception of specific motion domains in order to understand visual perception abnormalities in autism. The specific aims of each experiment included in this thesis are as follow: • Chapter 3: To investigate the theory of enhanced local details and neglected global picture, using- for the first time- local/global motion coherence stimuli in autism. • Chapter 4: To investigate the neural response biased found in autism in response to radial optic flow. We used optic flow stimuli in self-heading direction discrimination tasks. • Chapter 5: To investigate whether speed parameter is normal in autism-based on the previous outcome- using drifting grating stimuli in a speed discrimination task. Participants and Methods This study recruited two groups of subjects –one with ASD (n = 14), and another with Typical Development (TD) (n= 14), age range (16- 40 years). • Chapter 3 : We used Random Dot Kinatogram (RDK) as global coherence stimuli and employed it in two tasks : (1) Coherent Motion (CM) task, where coherence levels were varied and the subjects had to detect the global direction of the coherent dots, (2) CM with Form From Motion (FfM) stimulus where the FfM consisted of one of four different shapes embedded in the global RDK task. • Chapter 4: We used RDK with optic flow stimuli, which investigated self-direction discrimination in two tasks: angle of eccentricity, and contrast sensitivity. In both tasks we randomized the dot density (15, 80 dots) and speed (4, 10 deg/sec) of the moving stimulus dots. • Chapter 5: We used a pair of drifting gratings with a spatial frequency 2 cycle/ degree, oriented vertically and drifting perpendicular to the direction of orientation, and varied the speed (2, 6 deg/ sec) and the stimuli presentation (250 – 500ms) Results • Chapter 3: Although adults with autism showed comparable performance in reporting global direction similar to the control group, their ability to process global properties, when FfM shape was embedded, declined ( Mean threshold ASD: MC= 13.58, CM-FfM= 30.65) In addition, ASD required more time to respond to global coherence even when their performance was comparable to that of the control group. • Chapter 4: No significant group differences were found for low dot density (15 dots), while high dot (80 dots) density showed low sensitivity to OF motion in the ASD group compared to the TD. Contrast sensitivity task, however, showed lower sensitivity in the ASD group for detecting OF motion when dot density was low (15 dots) and no differences at higher dot density (80 dots) was found. Both tasks showed no group differences in the dot speed changing and no significant differences in response time were observed. • Chapter 5: No group differences (p = 0.226) in sensitivity to speed-discrimination task were found between the ASD and control group in all parameters used in this experiment. The response times were also comparable between both groups (p = 0.855). Conclusions • Chapter 3: Motion perception in ASD found enhanced to local details particularly when motion stimuli involve both local/global information segregation at the same time. We suggest increased internal neural noise and worse external noise filtering as cause of poor global performance in this type of task. • Chapter 4: There were selective impairments in OF processing that may related to altered neural connectivity between the activated visual areas in ASD. Another suggestion might be related to long neural trajectory within higher visual areas, ex. MST. • Chapter 5: Normal motion processing may be found in ASD, however, it this might triggered by task complexity and the visual neural areas that are involved in processing motion information. The overall results suggest selective impairments in visual motion perception in ASD. These impairments would depend upon the task requirements and therefore on the activated visual networks that contribute to different aspects of motion information processing. The present studies provide novel findings in defining deficits in motion perception in autism, which thereby may contribute in understanding disturbed visual function in ASD.