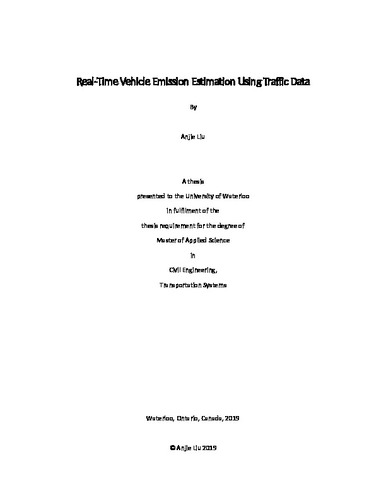 The current state of climate change should be addressed by all sectors that contribute to it. One of the major contributors is the transportation sector, which generates a quarter of greenhouse gas emissions in North America. Most of these transportation related emissions are from road vehicles; as result, how to manage and control traffic or vehicular emissions is therefore becoming a major concern for the governments, the public and the transportation authorities. One of the key requirements to emission management and control is the ability to quantify the magnitude of emissions by traffic of an existing or future network under specific road plans, designs and traffic management schemes. Unfortunately, vehicular traffic emissions are difficult to quantify or predict, which has led a significant number of efforts over the past decades to address this challenge. Three general methods have been proposed in literature. The first method is for determining the traffic emissions of an existing road network with the idea of measuring the tail-pipe emissions of individual vehicles directly. This approach, while most accurate, is costly and difficult to scale as it would require all vehicles being equipped with tail-pipe emission sensors. The second approach is applying ambient pollutant sensors to measure the emissions generated by the traffic near the sensors. This method is only approximate as the vehicle-generated emissions can easily be confounded by other nearby emitters and weather and environmental conditions. Note that both of these methods are measurement-based and can only be used to evaluate the existing conditions (e.g., after a traffic project is implemented), which means that it cannot be used for evaluating alternative transportation projects at the planning stage. The last method is model-based with the idea of developing models that can be used to estimate traffic emissions. The emission models in this method link the amount of emissions being generated by a group of vehicles to their operations details as well as other influencing factors such as weather, fuel and road geometry. This last method is the most scalable, both spatially and temporally, and also most flexible as it can meet the needs of both monitoring (using field data) and prediction. Typically, traffic emissions are modelled on a macroscopic scale based on the distance travelled by vehicles and their average speeds. However, for traffic management applications, a model of higher granularity would be preferred so that impacts of different traffic control schemes can be captured. Furthermore, recent advances in vehicle detection technology has significantly increased the spatiotemporal resolutions of traffic data. For example, video-based vehicle detection can provide more details about vehicle movements and vehicle types than previous methods like inductive loop detection. Using such detection data, the vehicle movements, referred to as trajectories, can be determined on a second-by-second basis. These vehicle trajectories can then be used to estimate the emissions produced by the vehicles. In this research, we have proposed a new approach that can be used to estimate traffic generated emissions in real time using high resolution traffic data. The essential component of the proposed emission estimation method is the process to reconstruct vehicle trajectories based on available data and some assumptions on the expected vehicle motions including cruising, acceleration and deceleration, and car-following. The reconstructed trajectories containing instantaneous speed and acceleration data are then used to estimate emissions using the MOVES emission simulator. Furthermore, a simplified rate-based module was developed to replace the MOVES software for direct emission calculation, leading to significant improvement in the computational efficiency of the proposed method. The proposed method was tested in a simulated environment using the well-known traffic simulator - Vissim. In the Vissim model, the traffic activities, signal timing, and vehicle detection were simulated and both the original vehicle trajectories and detection data recorded. To evaluate the proposed method, two sets of emission estimates are compared: the “ground truth” set of estimates comes from the originally simulated vehicle trajectories, and the set from trajectories reconstructed using the detection data. Results show that the performance of the proposed method depends on many factors, such as traffic volumes, the placement of detectors, and which greenhouse gas is being estimated. Sensitivity analyses were performed to see whether the proposed method is sufficiently sensitive to the impacts of traffic control schemes. The results from the sensitivity analyses indicate that the proposed method can capture impacts of signal timing changes and signal coordination but is insufficiently sensitive to speed limit changes. Further research is recommended to validate the proposed method using field studies. Another recommendation, which falls outside of this area of research, would be to investigate the feasibility of equipping vehicles with devices that can record their instantaneous fuel consumption and location data. With this information, traffic controllers would be better informed for emission estimation than they would be with only detection data.