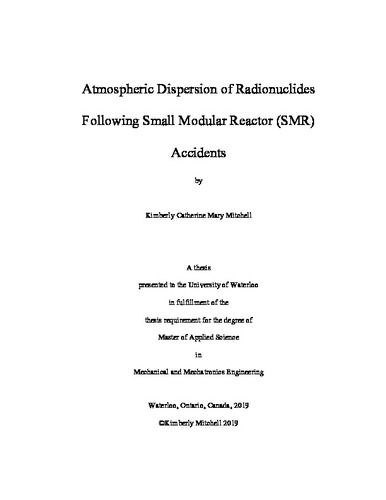 Small modular reactors (SMRs), reactors having a power rating of 300 Megawatts (MW) or less, have been under development for several decades. As fewer larger reactors are built due to the high upfront capital investment, interest in SMRs has increased. Some designs lack a containment structure. Designers propose that the inherent safety of SMRs justify this choice. A projected source term for a 300 MW SMR can be devised by prorating the source term of large reactors. The source term for this study was determined by dividing the SMR power rating by that of the Fukushima reactors. The benefit of this approach is that a variety of research and measurements have been used to estimate the Fukushima source term. The source term and weather data inputs can be used to determine radionuclide dispersion following release of SMR core nuclides following an accident without any containment structure. This study used reanalysis data, the Weather Research & Forecasting model and the HYSPLIT dispersion code to determine meteorological fields and analyze public dose rate and total dose. The analysis performed determined that a release, similar in composition to that of a Light Water Reactor, would result in unacceptably high public doses unless a containment system were in place.