Stability and Strain in Hisactophilin and Mechanism of the Myristoyl Switch 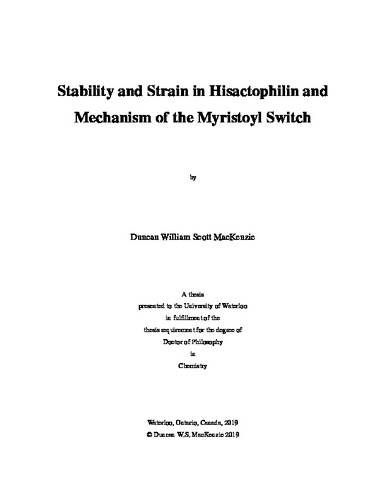 Hisactophilin is a myristoylated, histidine-rich, pH-dependent actin- and membrane-binding protein. In response to cellular changes in pH, this β-trefoil protein reversibly switches between cytosolic and membrane- bound forms. A key feature of the reversible membrane-binding is the covalent acylation of the N-terminal glycine with a C14 myristoyl group. At pH > 6.9, the myristoyl group favours sequestration in the barrel of the β-trefoil, whereas at pH < 6.9, the myristoyl group favours increased solvent accessibility and eventually anchors hisactophilin to the inner leaflet of the cell membrane. In Dictyostelium discoideum, membrane-bound hisactophilin also binds and bundles actin, contributing to cell locomotion. Despite widespread myristoylation of eukaryotic proteins, its effects on protein folding, stability, and function are still poorly understood and limits our understanding of a broader set of switches and the ability to design them. Combining equilibrium denaturation, folding kinetics, variable temperature and variable pH nuclear magnetic resonance (NMR), chemical shift perturbations, and reverse micelle encapsulation, we use hisactophilin as a model for characterizing the determinants of finely tuned myristoyl switches. Equilibrium stability measurements identified hisactophilin mutants with broken switches—in which pH ceases influencing conformational switching—and switches with tuned sensitivities. In a few cases, stunningly small changes to amino acid side chains broke the pH-dependent myristoyl switch. Interestingly, a thermodynamic switch broken by one mutation may be repaired by making additional mutations, illustrating novel synergistic contributions to global stability and switching. Studying the mutants also revealed that a predominant effector of switching appears to be strain from an overpacked core when the myristoyl group is sequestered in the binding pocket. Altering strain through changing the geometry of the myristoyl binding pocket offers a new approach for tuning the sensitivity of hisactophilin and other switch proteins, as well as to inform future design efforts. The temperature dependence of amide proton chemical shifts localized myristoyl-induced strain to a set of residues in wild-type hisactophilin’s myristoyl-binding pocket. The mutants with broken switches (I85L, which favours the accessible state, and F6L/I85L/I93L, which favours the sequestered state), however, no longer show evidence of strain. Nonlinear temperature dependence of chemical shifts indicate that dynamics in residues that report on switching adjacent to the myristoyl group are also attenuated in broken-switch mutants. Thus, the strained residues in the protein core appear to form part of the communication network between the proton binding site(s) and the myristoyl group. Apparent pKas of backbone amide protons for I85L and LLL obtained by NMR-monitored pH titrations further support the decoupling of residues adjacent to the myristoyl group from switching. While we have achieved a high resolution and unrivalled look at the mechanism of hisactophilin’s pH-dependent myristoyl switch, we have also shown the validity and utility of chemical shift temperature dependences for characterizing small, functionally relevant local stability changes and gaining insight to the near-native energy landscape and its relation to protein function. Myristoyl switches participate in important cell signalling cascades by forming reversible protein- membrane or protein-protein interactions in response to environmental stimuli. Notwithstanding their prevalence, the high sensitivity and cooperativity of myristoyl switches complicates their study, resulting in poorly understood determinants and mechanisms. By employing thermodynamic measurements and developing a new, general application of an NMR technique, we have developed a detailed picture of the mechanism of a pH-dependent myristoyl switch.

Duncan MacKenzie (2019). Stability and Strain in Hisactophilin and Mechanism of the Myristoyl Switch. UWSpace. http://hdl.handle.net/10012/14678