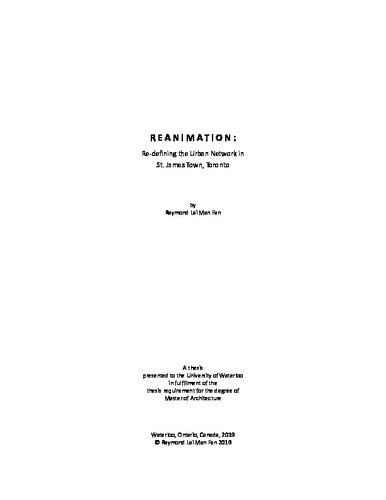 Urban intensification in the city of Toronto during the 1960s draws from the essential idea – “Tower in the Park”, a concept that we now recognize as pervasively problematic. These neighbourhoods are flooded with criticism of gigantism, placelessness, a lack of street to building relationships, social and physical segregation. In addition, the privatization of public spaces renders a stagnant neighbourhood environment, and the inadequacy of public infrastructure does not support the needs of contemporary urban life in the city. The work presented in this thesis focuses on St. James Town – one of the many “Tower in the Park” neighbourhoods, as a testing ground for strategies of revitalization. The reclamation of dysfunctional spaces that poses a threat to the urban condition, in turn, transforms the disadvantage into new opportunities for urban intensification. The site strategies laid out through this work encourages a fine-grained, diverse and dynamic urban environment that are site-specific and focuses on a sense of place. Change from large lot landholdings to smaller lot parcelization implies the promotion of incremental development, allowing for an immediate response tailored for needs at a given moment in time. This approach breaks down the ownership structure and involves a variety of actors in the process of transformation. By reconstituting the network of relations between streets to building, building to parcels, parcels to block, and block to neighbourhood, the once homogeneous built form of St. James Town brings about a new shift towards a diversely contrasting cityscape, ultimately showcasing the power of incremental systems of intervention.