Influence of Temperature on the Catalytic Function of Phosphoenolpyruvate Carboxykinase 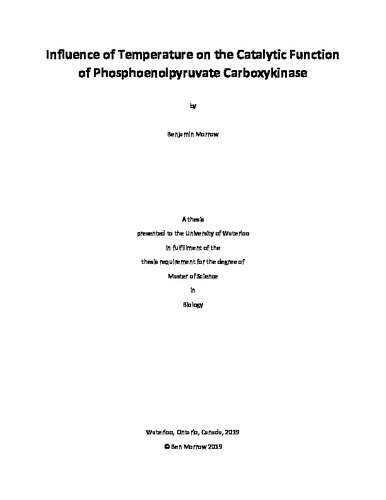 Enzymes are well known for their importance in biological systems. One of these enzymes, PEPCK, has been well studied and characterized over the years. Successful catalysis in PEPCK is very dependent on mobile loop elements within the catalytic cleft folding properly. One loop, the Ω-loop, has been found to regulate access to the catalytic cleft of PEPCK by acting as a lid. Without this loop, PEPCK became inactive. When the Ω-loop was disrupted by an amino acid mutation, the stability of this loop was affected, resulting in a decrease in the loops ability to form the lid complex. This had the consequence of decreasing catalytic completion, because the reactive enolate formed during catalysis was unprotected from solvent, resulting in unintended protonation. Temperature is a well-studied variable that influences the rate of catalyzed and uncatalyzed reactions. Typically, the rate of an enzyme catalyzed reaction will increase in a logarithmic fashion in response to an increase in temperature. Temperature is also observed to affect the stability of enzymes, resulting in potential effects on the observed rate that are independent of the direct effect of temperature on the catalyzed reaction. To date, the influence of temperature on the PEPCK catalyzed reaction has not been assessed. This study investigates the effect of temperature on the stability of the enzyme, the rate of the various catalyzed reactions, and the impact of temperature on the stability of the Ω-loop, and the interpretation of those effects in light of what is known about the importance of loop motion in the catalytic functioning of the enzyme. Data from the kinetic studies of WT rcPEPCK and A467G PEPCK show that as expected, the rate of the catalyzed reaction increases as temperature increases, and that the stability of the Ω-loop in its closed, active state is affected at higher temperatures in A467G PEPCK. Surprisingly, this was not observed in the WT rcPEPCK enzyme. Surprisingly, the resultant activation energies determined for the A467G variant of PEPCK suggests that the forward direction of catalysis is less favourable than the reverse direction, opposite of what was previously hypothesized. While the Arrhenius equation predicts a linear response in reaction rates relative to temperature change, some of the catalyzed reactions were exhibited to deviate from linearity with a break at approximately 41°C. A rationale for the observed deviation is discussed in terms of the recently proposed equilibrium model of enzyme temperature dependence.