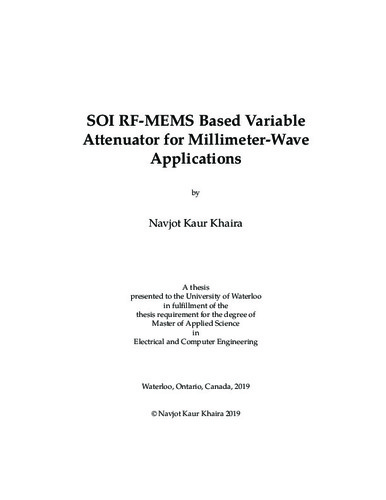 The most-attractive feature of microelectromechanical systems (MEMS) technology is that it enables the integration of a whole system on a single chip, leading to positive effects on the performance, reliability and cost. MEMS has made it possible to design IC-compatible radio frequency (RF) devices for wireless and satellite communication systems. Recently, with the advent of 5G, there is a huge market pull towards millimeter-wave devices. Variable attenuators are widely employed for adjusting signal levels in high frequency equipment. RF circuits such as automatic gain control amplifiers, broadband vector modulators, full duplex wireless systems, and radar systems are some of the primary applications of variable attenuators. This thesis describes the development of a millimeter-wave RF MEMS-based variable attenuator implemented by monolithically integrating Coplanar Waveguide (CPW) based hybrid couplers with lateral MEMS varactors on a Silicon–on–Insulator (SOI) substrate. The MEMS varactor features a Chevron type electrothermal actuator that controls the lateral movement of a thick plate, allowing precise change in the capacitive loading on a CPW line leading to a change in isolation between input and output. Electrothermal actuators have been employed in the design instead of electrostatic ones because they can generate relatively larger in-line deflection and force within a small footprint. They also provide the advantage of easy integration with other electrical micro-systems on the same chip, since their fabrication process is compatible with general IC fabrication processes. The development of an efficient and reliable actuator has played an important role in the performance of the proposed design of MEMS variable attenuator. A Thermoreflectance (TR) imaging system is used to acquire the surface temperature profiles of the electrothermal actuator employed in the design, so as to study the temperature distribution, displacement and failure analysis of the Chevron actuator. The 60 GHz variable attenuator was developed using a custom fabrication process on an SOI substrate with a device footprint of 3.8 mm x 3.1 mm. The fabrication process has a high yield due to the high-aspect-ratio single-crystal-silicon structures, which are free from warping, pre-deformation and sticking during the wet etching process. The SOI wafer used has a high resistivity (HR) silicon (Si) handle layer that provides an excellent substrate material for RF communication devices at microwave and millimeter wave frequencies. This low-cost fabrication process provides the flexibility to extend this module and implement more complex RF signal conditioning functions. It is thus an appealing candidate for realizing a wide range of reconfigurable RF devices. The measured RF performance of the 60 GHz variable attenuator shows that the device exhibits attenuation levels (|S21|) ranging from 10 dB to 25 dB over a bandwidth of 4 GHz and a return loss of better than 20 dB. The thesis also presents the design and implementation of a MEMS-based impedance tuner on a Silicon-On-Insulator (SOI) substrate. The tuner is comprised of four varactors monolithically integrated with CPW lines. Chevron actuators control the lateral motion of capacitive thick plates used as contactless lateral MEMS varactors, achieving a capacitance range of 0.19 pF to 0.8 pF. The improvement of the Smith chart coverage is achieved by proper choice of the electrical lengths of the CPW lines and precise control of the lateral motion of the capacitive plates. The measured results demonstrate good impedance matching coverage, with an insertion loss of 2.9 dB. The devices presented in this thesis provide repeatable and reliable operation due to their robust, thick-silicon structures. Therefore, they exhibit relatively low residual stress and are free from stiction and micro-welding problems.