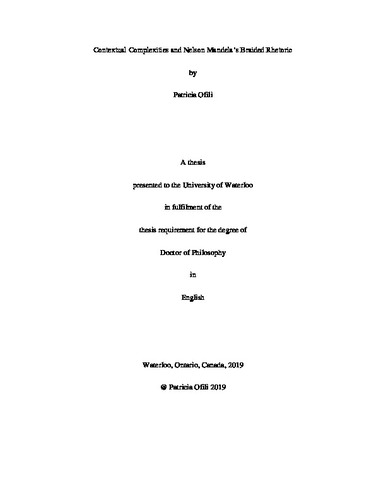 This dissertation revolves around the complex political circumstances in apartheid South Africa that produced Nelson Mandela the rhetorician, human rights activist, and the longest political prisoner in human history. The manner in which Nelson Mandela deploys a braided rhetoric that is a combination of the African and Western rhetorical traditions for spearheading the anti-apartheid struggle in South Africa is investigated. Mandela draws upon the African rhetorical tradition through which his identity, selfhood, and ethos were forged, while appropriating the Western rhetorical tradition through which he attained his education and training as a lawyer. Also examined is the complexity of inter-ethnic strife among Black South Africans; a situation that was exploited by the apartheid regime and which made the western rhetorical tradition inadequate for addressing apartheid domination. The dissertation also studies Mandela’s dynamism as he navigates the murky waters of apartheid policies, which were not only smoke screens for veiling their racist intent but were enactments that kept morphing for the purpose of crushing any form of dissent. The complex situation produced an audience that was very diverse; and to appeal to these local and international audiences, Mandela required a rhetoric that was nuanced and effective enough to dismantle the apartheid racist order. Mandela employs narratives, which are performed in keeping with the African oral tradition - to unify, organize, and inspire his people; to call on the world beyond the borders of South Africa to account for their support of Apartheid; and to call out whites South Africans for their implicit and explicit consent to the evils of a racist social, political, and economic order. Mandela’s rhetoric is strengthened particularly because, even as he speaks and writes in service of a struggle against systemic racism, he rises above the reification of essentialism and thus resists complicity.