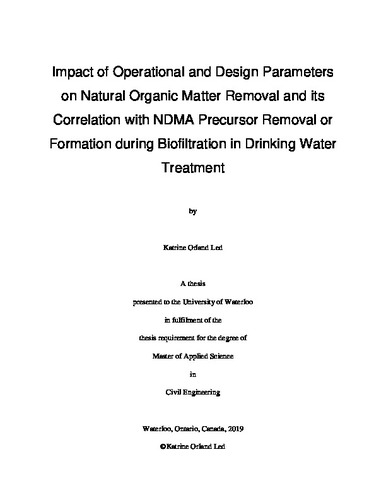 NOM is a complex mixture of organic compounds that are present in all natural waters and is mainly originating from plant and aquatic organism degradation products. Therefore, the specific composition of NOM is site-specific. Removing NOM during drinking water treatment is very beneficial, since NOM not only causes aesthetic problems, such as taste, odour, and colour problems, but also impacts other treatment processes. NOM, for examples, causes increased coagulant and disinfectant demands; contributes to corrosion and bacterial regrowth throughout the distribution system; transports metals and hydrophobic chemicals; and interferes in adsorption processes of other contaminants. However, one of the most important points for removing NOM is that NOM fractions have been identified as being precursors to potentially carcinogenic disinfection by-products (DBPs). The goal of this research was to identify the impact of different operational, design, and water quality parameters on the characteristics and removal of NOM fractions during bench-scale and pilot-scale biofilter columns at different drinking water treatment plants (DWTPs). Parameters investigated in bench-scale biofilter columns at three different facilities (Facilities B, I, and L) include: water sources, media acclimated/operated in different water sources, and pre-ozonation. During these bench-scale experiments, three different biofilter media (from Facilities B, I, and L media) were tested simultaneously at each of the three facilities. Also, two different pilot-scale experiments were carried out, one at Facility C, which investigated the following parameters: media type, backwash type, and ammonia addition. The other pilot-scale experiment was at Facility Q, which investigated the following parameters: full-scale treatment processes prior to biofiltration, media type, backwash type, and backwash frequency. At both the pilot-scale facilities, the biofilter profiles and kinetics of the NOM fraction removals for the different parameters were also investigated. Lastly, the NOM fraction removals from both the bench-scale and pilot-scale experiments were correlated to the NDMA precursor removals or formations. The NOM fractions in this research were characterized by using two relatively new NOM characterization techniques: LC-OCD and fluorescence excitation emission matrix (FEEM). LC-OCD separates NOM into five different fractions based on molecular weight size, and these fractions are: biopolymers (BP), humics (HS), building blocks (BB), low molecular weight (LMW) acids/humics, and LMW neutrals. FEEM detects molecules that contain fluorophores and it can therefore identify three different fractions: humic acids (HA), fulvic acids (FA), and protein-like materials. Furthermore, the NDMA concentrations in this research was analysed using a measuring technique called uniform formation condition (UFC). UFC mimics average chloramination conditions used at DWTPs across North America. The bench-scale experiments at Facilities B, I, and L showed that when all the different media acclimated/operated in different water sources were fed the same water source they behaved very similarly in terms of NOM fraction removal and water sources therefore matters. However, when the same media was fed the water sources from each of these facilities, then there were barely any similarities and the media acclimated/operated in different water sources therefore barely had any influence. Also, the pre-ozonation at Facility B improved the NOM fraction removals when combined with the bench-scale biofiltration columns. The pilot-scale experiments at Facilities C and Q showed that powdered activated carbon (PAC) drastically removed various NOM fractions, it, for example, successfully removed more than 83% of BP. Also, granular activated carbon (GAC) media was the media type that had the best removals of various NOM fractions at both pilot-scale facilities. At facility C, the chloraminated backwashed columns had higher removals of DOC (4.3 percentage points higher), BP (20 percentage points higher), LMW acids/humics (3.9 percentage points higher), and LMW neutrals (11 percentage points higher) than the GAC control columns. However, at Facility Q there were no noticeable differences between backwash types or backwash frequencies on the NOM removals, due to low removals at most sampling events. These low removals made it difficult to assess conclusively the influence from these parameters on NOM fraction removals. At Facility C, only DOC, BP, and HS relatively fitted the kinetics models, and the best data fit was for BP. At Facility Q, BP during phase 1 and DOC for only one column during phase 2 poorly fitted the kinetics models. However, there were no clear trends regarding which reaction order fitted each fraction removal the best. The reason is that the change in the coefficients of determination (R2 coefficients) only marginally changed from 0th to 2nd order model. Also, these poor fits between NOM fraction removals and kinetics models is due to, for example, only 4-5 data points for each profile and only low removals across the biofilters. For the NDMA UFC, pre-ozonation at facility B also substantially reduced NDMA UFC, and pre-ozonation combined with biofiltration had the lowest NDMA UFC concentrations. Softening also substantially increased NDMA UFC at the full-scale treatment process at Facility Q. Last, there was a statistically significant correlation between higher protein-like materials intensities as measured by FEEM in the biofilter influents and higher NDMA UFC concentrations in the biofilter influents. The same was also observed for the biofilter effluents. This research provides greater insight into NOM fraction removals, biofiltration performance, and the correlation between NOM and NDMA UFC. Although the results might be site-specific, these results indicated that to optimize the NOM fraction removals at a DWTP PAC, pre-ozonation, and GAC media in the biofilters should be employed. Also, to minimize NDMA precursor formation during drinking water treatment, pre-ozonation prior to the biofilters should be employed, but softening should be avoided. These findings provide insight to municipalities, consultants, and staff members at DWTPs on some operational and design parameters that should be taken into consideration when designing or upgrading a DWTP.

Katrine Led (2019). Impact of Operational and Design Parameters on Natural Organic Matter Removal and its Correlation with NDMA Precursor Removal or Formation during Biofiltration in Drinking Water Treatment. UWSpace. http://hdl.handle.net/10012/14659