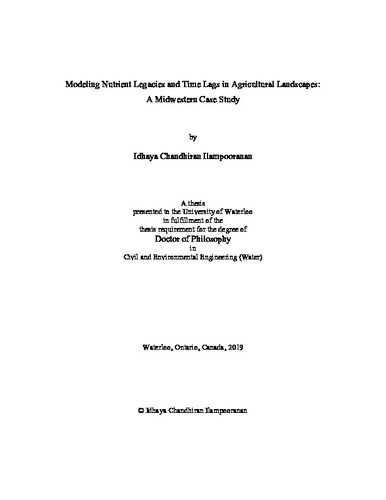 Land-use change and agricultural intensification have increased food production but at the cost of polluting surface and groundwater. Best management practices implemented to improve water quality have met with limited success. Such lack of success is increasingly attributed to legacy nutrient stores in the subsurface that may act as sources after reduction of external inputs. These legacy stores have built up over decades of fertilizer application and contribute to time lags between the implementation of best management practices and water quality improvement. However, current water quality models lack a framework to capture these legacy effects and corresponding lag times. The overall goal of this thesis is to use a combination of data synthesis and modeling to quantify legacy stores and time lags in intensively managed agricultural landscapes in the Midwestern US. The specific goals are to (1) quantify legacy nitrogen accumulation using a mass balance approach from 1949 - 2012 (2) develop a SWAT model for the basin and demonstrate the value of using crop yield information to increase model robustness (3) modify the SWAT (Soil Water Assessment Tool) model to capture the effect of nitrogen (N) legacies on water quality under multiple land-management scenarios, and (4) use a field-scale carbon-nitrogen cycling model (CENTURY) to quantify the role of climate and soil type on legacy accumulation and water quality. For objectives 1 and 2, the analysis was performed in the Iowa Cedar Basin (ICB), a 32,660 km2 watershed in Eastern Iowa, while for objective 3, the focus has been on the South Fork Iowa River Watershed (SFIRW), a 502 km2 sub-watershed of the ICB, and for objective 4 the focus was at the field scale. For the first objective, a nitrogen mass balance analysis was performed across the ICB to understand whether legacy N was accumulating in this watershed and if so, the magnitude of accumulation. The magnitude of N inputs, outputs, and storage in the watershed was quantified over 64 years (1949 – 2012) using the Net Anthropogenic Nitrogen Inputs (NANI) framework. The primary inputs to the system were atmospheric N deposition (9.2 ± 0.35 kg/ha/yr), fertilizer N application (48 ± 2 kg/ha/yr) and biological N fixation (49 ± 3 kg/ha/yr) and while the primary outputs from the system was net food and feed that was estimated as 42 ± 4.5 kg/ha/yr. The Net Anthropogenic Nitrogen Input (NANI) to the system was estimated to be 64 ± 6 kg/ha/yr. Finally, an estimated denitrification rate constant of 12.7 kg/ha/yr was used to estimate the subsurface legacy nitrogen storage as 33.3 kg/ha/yr. This is a significant component of the overall mass budget and represents 48% of the NANI and 31% of the fertilizer added to the watershed every year. For the second objective, the effect of crop yield calibration in increasing the robustness of the hydrologic model was analyzed. Using a 32,660 km2 agricultural watershed in Iowa as a case study, a stepwise model refinement was performed to show how the consideration of additional data sources can increase model consistency. As a first step, a hydrologic model was developed using the Soil and Water Assessment Tool (SWAT) that provided excellent monthly streamflow statistics at eight stations within the watershed. However, comparing spatially distributed crop yield measurements with modeled results revealed a strong underestimation in model estimates (PBIAS Corn = 26%, PBIAS soybean = 61%). To address this, the model was refined by first adding crop yield as an additional calibration target and then changing the potential evapotranspiration estimation method -- this significantly improved model predictions of crop yield (PBIAS Corn = 3%, PBIAS soybean = 4%), while only slightly improving streamflow statistics. As a final step, for better representation of tile flow, the flow partitioning method was modified. The final model was also able to (i) better capture variations in nitrate loads at the catchment outlet with no calibration and (ii) reduce parameter uncertainty, model prediction uncertainty, and equifinality. The findings highlight that using additional data sources to improve hydrological consistency of distributed models increases their robustness and predictive ability. For the third objective, the SWAT model was modified to capture the effects of nitrogen (N) legacies on water quality under multiple land-management scenarios. My new SWAT-LAG model includes (1) a modified carbon-nitrogen cycling module to capture the dynamics of soil N accumulation, and (2) a groundwater travel time distribution module to capture a range of subsurface travel times. Using a 502 km2 SFIR watershed as a case study, it was estimated that, between 1950 and 2016, 25% of the total watershed N surplus (N Deposition + Fertilizer + Manure + N Fixation – Crop N uptake) had accumulated within the root zone, 14% had accumulated in groundwater, while 27% was lost as riverine output, and 34% was denitrified. In future scenarios, a 100% reduction in fertilizer application led to a 79% reduction in stream N load, but the SWAT-LAG results suggest that it would take 84 years to achieve this reduction, in contrast to the two years predicted in the original SWAT model. The framework proposed here constitutes a first step towards modifying a widely used modeling approach to assess the effects of legacy N on time required to achieve water quality goals. The above research highlighted significant uncertainty in the prediction of biogeochemical legacies -- to address this uncertainty in the last objective the field scale CENTURY model was used to quantify SON accumulation and depletion trends using climate and soil type gradients characteristic of the Mississippi River Basin. The model was validated using field-scale data, from field sites in north-central Illinois that had SON data over 140 years (1875-2014). The study revealed that across the climate gradient typical of the Mississippi River Basin, SON accumulation was greater in warmer areas due to greater crop yield with an increase in temperature. The accumulation was also higher in drier areas due to less N lost by leaching. Finally, the analysis revealed an interesting hysteretic pattern, where the same levels of SON in the 1930s contributed to a lower mineralization flux compared to current.