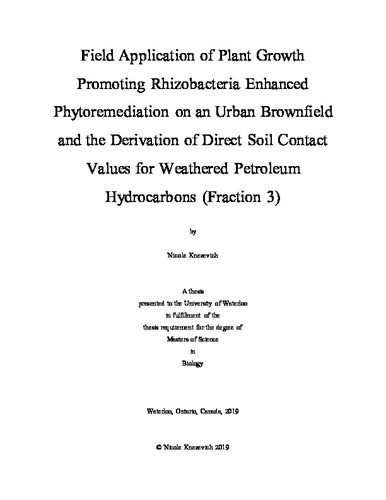 There are over 30,000 contaminated brownfield sites in Canada, many of which are located in desirable urban areas; and therefore have a high value for potential redevelopment. The remediation of urban brownfield sites presents a challenge as they frequently contain very complex mixtures of contaminants. Phytoremediation is a cost-effective technology that uses plants to remediate a range of contaminants from the soil. However, the capabilities of currently used phytoremediation systems are often limited due to poor bioavailability of the contaminants, growth inhibition caused by poor soil quality, and the presence of contaminant mixtures. One way to enhance phytoremediation systems is the use of plant growth promoting rhizobacteria (PGPR), naturally present soil bacteria that are able to directly and indirectly influence plant growth and reduce the production of stress ethylene in plants. PGPR enhanced phytoremediation systems (PEPS) have been successfully used to remediate rural sites; however, they have not yet been applied to urban brownfields. In this study a two year field trial was conducted on an urban brownfield site in Toronto, Ontario, Canada, to evaluate the ability of PEPS to enhance plant growth and remediate petroleum hydrocarbons (PHCs) on a mixed contaminant site. The effectiveness of PEPS was evaluated through plant biomass production and PHC remediation. Based on germination rates and biomass production in the field, sunflowers (Helianthus annuus var Mammoth Russian) were recommended for PEPS on urban brownfields. PGPR did not have a consistent effect on plant biomass production during the field trials. The impact of PGPR on the native microbial community was evaluated to ensure there were no adverse effects. Bacterial numbers in the rhizosphere of all planted treatments increased throughout the second field season. The plant species utilized, rather than the PGPR treatment, had the largest impact on the microbial community. A significant decrease in the PHC concentrations was observed during the second field season in planted plots treated with PGPR, with an average percent remediation of 25 percent (%). Therefore, based on the results of the two year field trial, PEPS shows promise as an effective remediation technique for urban brownfield remediation. Concerns were raised that the developed fine- and coarse-grained Ecological Tier 1 Canada-wide standards (CWS) for PHC fraction 3 (F3) based on freshly spiked soils are overly conservative and may result in unnecessary and costly remediation. Although the PHC CWS were revised using more recent toxicological data from field studies, the applicability of the current guidelines to sites with historical PHC contamination warrants further investigation as studies with a limited number of PHC concentrations and a ranked response approach were relied upon to derive the current PHC CWS for F3. In this study, plant toxicity tests were conducted to examine the toxicity of weathered PHC (mostly F3) in a coarse-grained soil to derive direct soil contact values for ecological receptors. Coarse grained field and reference soils were obtained from a landfarm site where PHC sludge had been spread for approximately 35 years. Toxicity tests using plants were conducted following standardized test protocols developed by Environment Canada. Endpoint effective concentrations (EC)/and inhibitory concentrations (IC) 25% were calculated to derive soil standards for F3 in coarse-grained soil protective of plants exposed through direct contact with soil. The proposed guideline values derived for the weathered F3 of 659 and 1,961 milligrams per kilogram (mg/kg), respectively, for agricultural/residential and industrial land use are higher than the current ecological Tier 1 CWS for F3 in coarse-grained soil (300 mg/kg for agricultural/residential land use and 1,700 mg/kg for commercial/industrial land use) and support the derivation of remediation targets higher than the current guideline. Additional studies with a more sensitive test species (i.e., earthworms) and a wider range of PHC concentrations are recommended to confirm this conclusion.