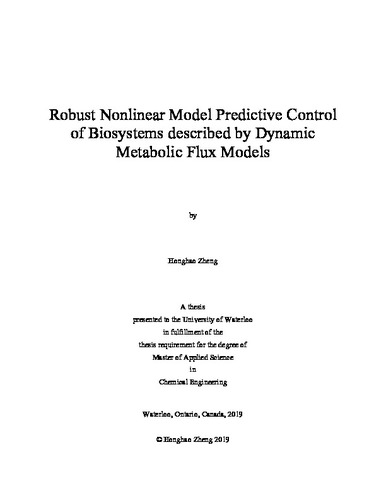 The accuracy of the model used for prediction in Nonlinear Model Predictive Controller (NMPC) is one of the main factors affecting the closed loop performance. Since it is impossible to formulate a perfect model for a real process, there are always differences between the responses predicted by the model and the responses observed from the process. Hence, robustness to model error is an essential property that the controller must have to be adopted in industrial applications. Propagating the uncertainty in the model onto the variables used by the controller is one the key challenges for efficient implementation of a robust controller. Uncertainty propagation approaches such as Monte Carlo simulations and the Polynomial Chaos Expansions (PCE) has been found to suffer from exponentially increasing computational effort with the number of uncertain parameters. Accordingly, the main goal of this thesis is to develop a novel formulation of NMPC based on an uncertainty propagation approach that is more computationally efficient as compared to previously reported approaches. The proposed robust controller in this thesis is specifically targeted to biosystems that are modeled by Dynamic Metabolic Flux models. These models that are becoming increasingly popular for modelling bioprocesses are based on the premise that microorganisms have learned through natural evolution to optimally allocate their resources (nutrients) to maximize a biological objective such as growth or ATP production. Accordingly, these flux models are formulated by LP (Linear Programming) optimizations with constraints that are solved at each time interval and then can be used in conjunction with mass balances to predict the dynamic evolution of different metabolites. The uncertainty in these models is associated to inaccuracies of model parameters involved in the constraints. Thus, although the problem can be solved for particular model parameters by an LP, in the presence of uncertainty the problem becomes nonlinear since different active sets of constraints may become active for parameters’ values within their possible range of variation. Accordingly, the solution space of this nonlinear system can be divided into a set of polyhedrons where each point corresponds to a particular set of parameters within their range of uncertainty. The solution space is often referred in the thesis as the RHS (Right Hand Side) space since it is defined by the variations in the RHS of the constraints with respect to the uncertain parameters. To identify these polyhedrons a dividing procedure has been developed. Since all the polyhedrons can be proven to be convex cones based on a standard simplex form of LP, this dividing method is referred to as the Convex Cone Method (CCM). The regions found by the CCM method are then compared to regions calculated with 100 Percent Rule where the latter has been often used to find a region of existence of a particular tableau in the Simplex method. From this comparison it is found that the CCM can both identify all the possible tableaus with a given region of uncertain parameters and it can also be used the probability for occurrence of each one of the tableaus. These two facts make the CCM an attractive basis for uncertainty propagation in an LP problem instead of the 100 Percent Rule. After identifying the possible tableaus for a given region of model parameters, a novel method is developed for propagating uncertainty onto the controlled variables to be referred to as Tableau Based Tree (TBT) method. The TBT method is based on the concept of propagating uncertainty into the prediction horizon of the controlled by using a tree structure which branches correspond to different tableaus identified by the CCM approach. It is then shown that the conservativeness of the NMPC controller can be significantly reduced based on this tree structure as compared to a Monte Carlo approach for uncertainty propagation. After propagating the uncertainty onto the relevant variables, the control actions for each branch of the tree structure can be obtained by a simple linear calculation. An EMPC (Economic Model Predictive Controller) is adopted in this work as a special realization of an NMPC algorithm where the controller pursues the maximization of an economic objective function. A simple theoretical comparison with a Monte Carlo uncertainty propagation approach shows that the TBT method have a potential to save considerable computational effort as compared to Monte Carlo simulation and PCEs. Finally, the TBT-based robust EMPC is applied in a case study dealing with a fed-batch reactor which is described by dynamic metabolic flux model (DMFM).