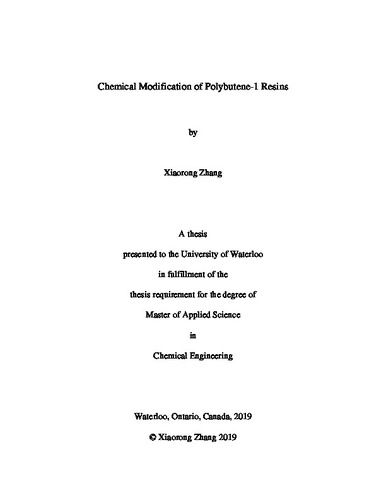 Controlled rheology polybutene (CRPB) resins have been produced by peroxide induced degradation during reactive processing in a batch mixing operation. Two grades of commodity polybutene-1 (PB-1) resins were selected for this study. Experiments were carried out at various peroxide concentrations and the resulting materials were characterized in terms of their molecular weight distribution (MWD) by high temperature size exclusion chromatography (SEC), linear viscoelastic properties by oscillatory shear measurements and melting/crystallization behavior by differential scanning calorimetry (DSC). Similar trends were observed for materials resulting from both commodity resins in the sense that increasing peroxide concentrations resulted in reduced molecular weight (MW) and rheological properties. The melt flow rate (MFR) was measured using a melt flow indexer and it was found to increase with peroxide concentration for both resins. Linear viscoelastic properties (complex viscosity and moduli) were also found to decrease with peroxide concentration, however the flow activation energy remained approximately constant for all materials. The melting temperature decreased with peroxide concentration, however, no significant effects were found on crystallization temperature. Finally, correlations were developed between zero-shear viscosity and weight-average molecular weight (MW), as well as between polydispersity index (PDI) and cross-over frequency and modulus for all samples produced.